An Interview With Hugh Miles

In this interview, we meet the award-winning wildlife filmmaker who brought us the legendary A Passion For Angling series

The adventures of Chris Yates and Bob James in the 1993 classic, ‘A Passion For Angling’, encapsulates everything that’s wonderful and beautiful about angling. The man responsible for capturing those magical moments was award-winning wildlife filmmaker, Hugh Miles, who during the making of the series experienced two very special June 16ths; the first at the legendary Redmire Pool, and the second at ‘The Secret Lake’, home to Harry, a potentially new British record carp. From that mystical, uncaught, ‘as-wide-across-the-back-as-my-Labrador’ monster, to the lake itself and how they discovered it, Hugh kindly answers the questions we’ve always wanted to ask…

CARPOLOGY: Monster Myths was the episode that captured viewers’ imagination more than any other; could you tell us who suggested the lake to you, or who found it?
HUGH MILES: “Bob had visited the lake a couple of years before, and Chris had the Leney stocking records. We all talked about the possibility of France and perhaps an unknown lake that had never been fished, and with a monster in it. Then they put two and two together, having the stocking records and with Bob having visited. Chris might’ve been there too and I think I’d also gone there for the wildlife… it was such a wonderful place for filming. That’s how it all came about. It was a sort of harmonic convergence, with us knowing about the lake, but not knowing about it, so to speak. We had the stocking records, we knew of Harry Teesdale, who was the forestry and fishery manager for the estate, and we got together with him in the pub.

“When I look at the film now I think to myself, Well, you could make all this up! You could arrange for an actor to pretend to be a forester, and the stocking records are pretty vague, so you could fudge the page or whatever. As a story, it could be fiction, but the great thing is, it’s true, and it’s a special place to be.”

CARPOLOGY: I know you can’t say where the lake is, but could you paint a picture of what it looked like… the size and shape etc?
HUGH MILES: “Basically it’s long and thin, and wooded around the edges. It’s around seven-acres in size, spring-fed and with incredibly clear water. It was very shallow too and full of weed, making it exceptionally rich, with amazing birdlife, like tufted ducks, mallards and teal. There were two or three nests of dabchicks, dragonflies galore and a hobby (a bird of prey) would hunt them there. His Lordship had lived there many years and he’d never seen a hobby. It’s a magical cliche, but yes, he saw it as he stood chatting to me. I saw it coming and so was able to focus on the spot… it was great!

“There were a couple of deeper parts, including the one where Harry (the monster) was hiding. There was a bit of a hollow, where years ago, I believe they dug, or dredged it out to make the island. There was also a deeper bit down the bottom end. Although it was shallow and clear, it was extremely difficult to see the fish.”

CARPOLOGY: The monster was described as being ‘as long as a twenty-pound salmon’ and, by Harry, ‘as wide across the back as my Labrador’, so what weight would he have been?
HUGH MILES: “Sixty-odd, on the basis of those measurements. Chris had a picture of his record fish from Redmire and Harry took one look at it and said, without any hesitation, “Oh no, it’s bigger than that,” so yes, it would easily have been a record at the time.”

CARPOLOGY: …And were there that many carp in there?
HUGH MILES: “I suppose the most we ever saw together were five, if I remember rightly. There was the nice, big mirror that the boys called the Fat Lady, and of course, there was Arnie, a bulky and really fabulous fish that featured heavily in the film. We reckoned that he was getting on for forty-pounds, but we never did catch him.”

CARPOLOGY: For how long did you fish and film at the lake?
HUGH MILES: “It was very much a summer film there. I’m not sure if we were there for opening day twice; I believe we were. I was very busy editing the other films, finishing off the soundtracks and writing the script. It was pretty full-on and we started transmission in September, so things were getting tight regarding getting finished. In the end, we felt that we had enough… a beautiful film with lots of wildlife and a story of a monster fish. There was the champagne and the rocket fired on June 16 and all that. It was a wonderful time… terrific!” 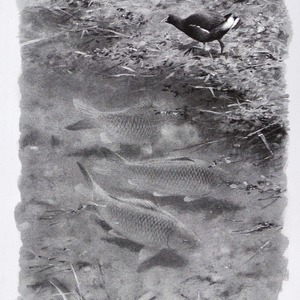 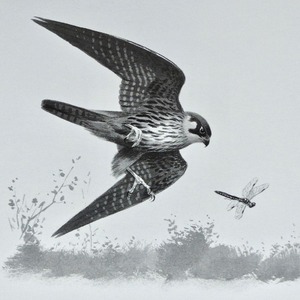 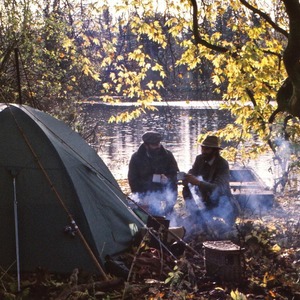 CARPOLOGY: How did June 16 at the secret lake differ from the one at Redmire?
HUGH MILES: “We knew there was a monster fish in there, so it was very exciting, more so perhaps than Redmire. Redmire was a known quantity, if you like. There might’ve been a huge fish in there, but there didn’t seem to be any record of anyone having seen any big ones. When Chris was there with Rod Hutchinson though, they did see some really big fish and of course, some were caught that later became records.”

CARPOLOGY: Bob had the Fat Lady and Chris caught that amazing looking twenty-pound common near the sluice. I also remember that sequence where Bob got smashed up…
HUGH MILES: “I was up on the scaffolding and we saw the fish approach. We’d agreed a signal, Chris whistled, the line tightened and it all went solid. Then ping! “Shall we go and have a cup of tea?” I think Bob said straight after!

“Bob’s a very experienced angler and he thought it was something to do with calcium on the weed roots… he was using 15lb line! It was one of the commons… twenty-pounds, twenty-five maybe. It was a fish that we’d seen occasionally. There were three of them…. we didn’t get Harry and we didn’t get Arnie, unfortunately. It’s a great yarn. I love the film and I loved the silence and the space. For me, one of the most magical bits of the whole series is the quote from Richard Walker and ‘the magic of carp-fishing dawns’. It’s a quiet piece with just the music and the sika deer calling… I love those arty, moody moments, and those beautiful bits at the end of the film.”

CARPOLOGY: …And what of the lake today? Are there still fish in there?
HUGH MILES: “It was dredged by the landowner. It was weedy and so shallow, and over the years it silted up, so much so it was very difficult to get out in the punt. All the silt was dredged and spread over the fields, which was wonderful for the crops. The landowner did speak about restocking it with carp. “Oh, don’t do that,’ I said, “it’ll get poached to hell! Put tench and rudd in there.” I haven’t been there for a while, but to my knowledge, there’s nothing in there.

“It was funny, because the qualification, if you like, for me being allowed to film there with the lads (Chris and Bob) was that no one was to ever know where it was. We were sworn to secrecy and so when we met up with Angling Times’ Mick Rouse to do a promotional piece, we had to meet in a distant town square and blindfold him! Thankfully, he had a sense of humour, because the carp sack we put over his head after blindfolding him was a bit smelly! We spun him round three times, put him in our car and after, did the same before we dropped him off back at the square. It was quite funny and I think we were more amused than they were!”

CARPOLOGY: Could you tell us more about Harry and Arnie?
HUGH MILES: “We did see Harry once when they were up the tree and I was on the scaffold with the camera. There was a place where Harry (Teesdale) said that he’d seen him the previous week in the deep hole. That’s where he was and we just saw him poke his head out from underneath a patch of weed.

“We also saw Arnie and I had him feeding any number of times… he was a really big fish! We reckoned at the time that he was thirty-five, maybe forty-pounds… he was solid.

“We were pretty excited, but they were difficult to see at the best of times as there were only around seven or eight fish in there. I spoke to Chris at great length about it and he reckoned they were all the originals stocked by Donald Leney in the 1930s, so they were 57-years-old or more - depending on their age when they were put in, of course.

“There’s a very brief shot of the monster in the film, but you’d hardly know that the fish was there unless you’re a carp angler, and you’d think Oh yeah! Then he slid back under the weed.”

CARPOLOGY: Finally, looking through the stocking book Chris Yates had from Donald Leney, do you believe there are more ‘secret lakes’ out there in the English countryside, or monster fish like Harry?
HUGH MILES: “Secret lakes? When I asked Chris, his response was “Definitely!” Yes! I thought, There’s magic out there somewhere… Donald Leney had good connections. Lord Shipton and other owners of private estates hidden away, all had lakes and ponds. They were all intrigued by the idea of having big fish in these waters. Donald was a friend of Chris’s. They met, conversed over tea, and Donald told him that he’d put fish in places that no one would know existed. Chris doesn’t reckon that there are other monsters in other lakes, if indeed they’re still alive. Again, Harry was well over 50-years-old when we were trying to catch him, so maybe those original Leneys are all dead now.

“The thing is, some of these lakes are so secret, that I’ve almost forgotten about them before I get there, so I have a very handy knack of not being able to tell anybody else about them. So yes, there are one or two that I’ve heard of, and hopefully, perhaps one day, someone will catch a big one from another secret lake…”

You can purchase the complete series of A Passion For Angling on DVD for £38.50, which also comes with a FREE copy of Martin Bowler’s Catching The Impossible book. To order, go to: passionforangling.info