Because stunning looking carp don’t start and finish with the likes of Mary, Mallins and The Black Mirror…

In March we collaborated with Our Love Of Carp Facebook page to bring you ‘The 50 Greatest Carp Of All Time’. It turned out to be a wonderful, good-looking-carp encyclopedia, but predictably it featured many of the usual suspects: Heather, The Black Mirror, Mary, The Royal Forty and co. Of course that’s not a bad thing, and staring at those amazing pictures of Terry with Mary and The Black Mirror is never wasted time, but for an encore we felt we needed to go in completely the opposite direction; rather than the known, we wanted the unknown. Unknown is pretty rare in today’s world, so Ryan Thomas, the man behind Our Love Of Carp, has put together his top 20 ‘lesser known best looking carp’. As you’ll see, each one is eye-wateringly beautiful. Cue drooling… 1. Brett White
Winter fishing is difficult at the best of times and can often be testing to the most seasoned of anglers. Some can even go multiple winters without a bite, but it really does pay to keep on getting out on the bank as there is the possibility you could land a fish of a lifetime, such as this heavily scaled 40lb mirror held by Brett White. This sought-after fish has seen the bank very few times throughout its long life and even on pressured waters it is astonishing as to how some fish can go uncaught
for so long! 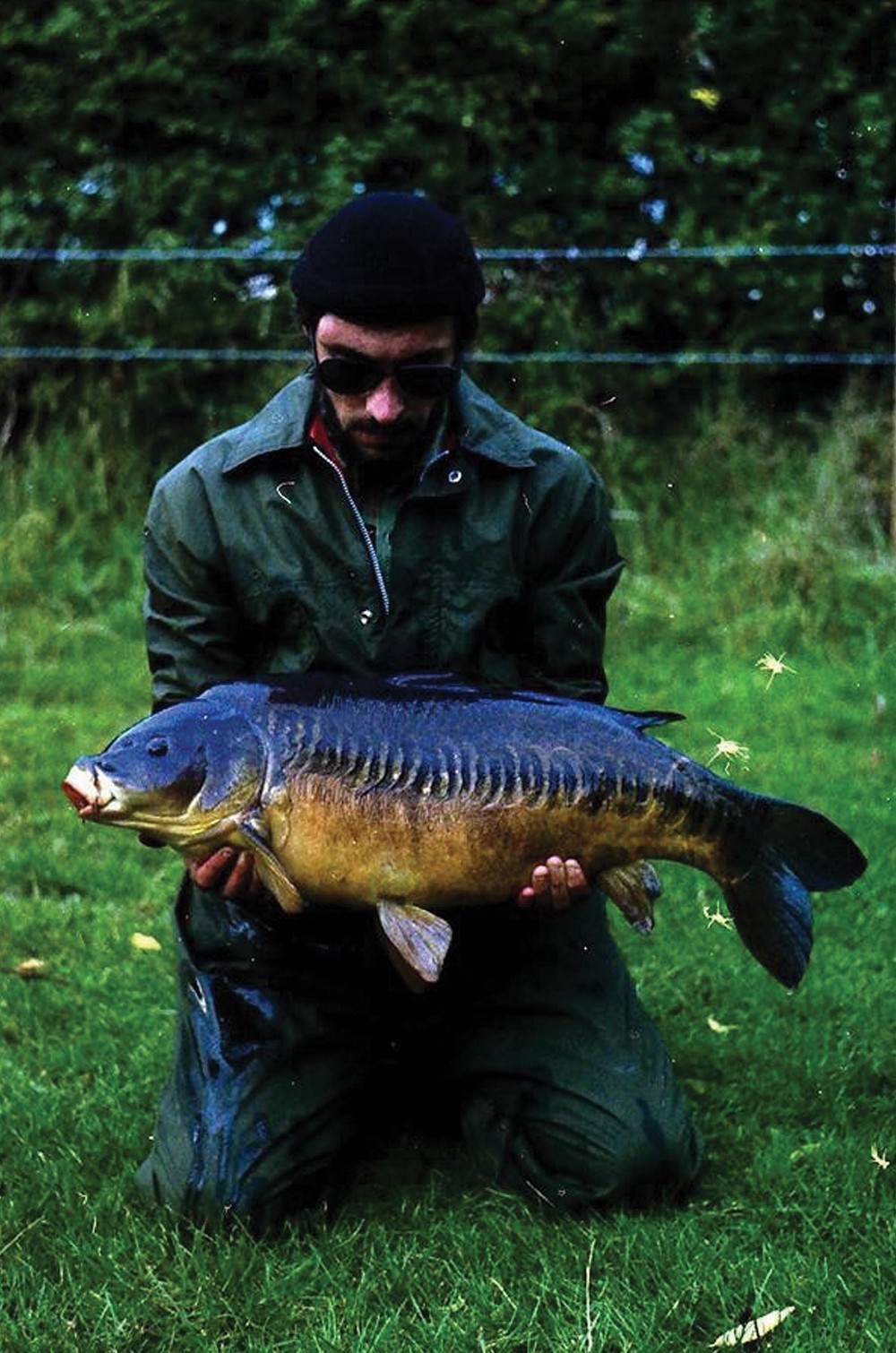 2. Ritchie McDonald
Ritchie once said he only ever had three ambitions in his fishing; they were: to catch a 30lb carp, a 40lb carp and to fish the great Redmire Pool. To catch any carp from this historical pool was a sensational result, yet this 21lb 12oz of pristine Redmire linear caught in 1979 could never disappoint any man. It was the second year Ritchie fished the venue (which has held the British record carp on more than one occasion) in search of the mythical beasts which were often seen, talked about, and photographed in its magical depths. 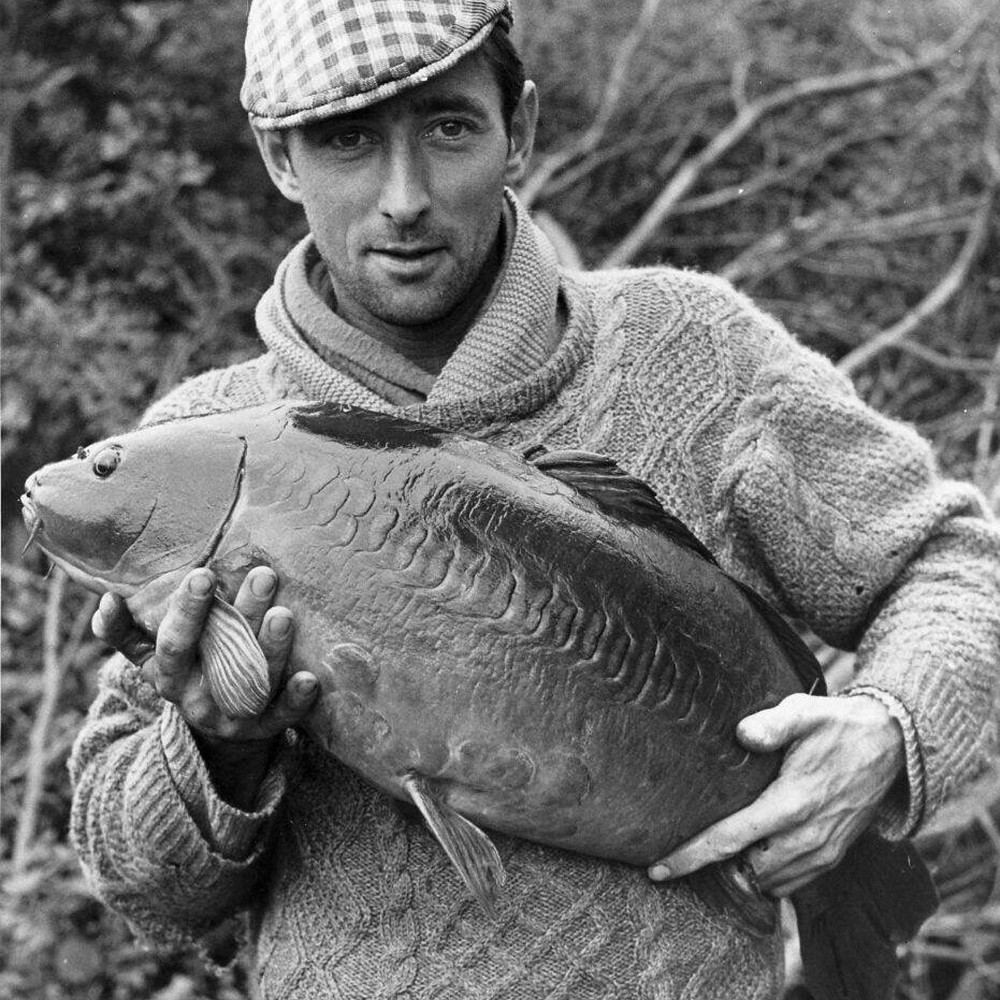 3. Bill Quinlan
This iconic shot presents one of Donald Leney’s beautifully bred scale-perfect linears caught using maggots from the magical Redmire Pool by Bill Quinlan and weighed 20lb 2oz back in September 1968. Bill was, and always will be, an inspiration to many through his successful angling exploits and was to make a significant mark in carp fishing history with the largest ever brace also caught from the same venue in the month of September only two years later. 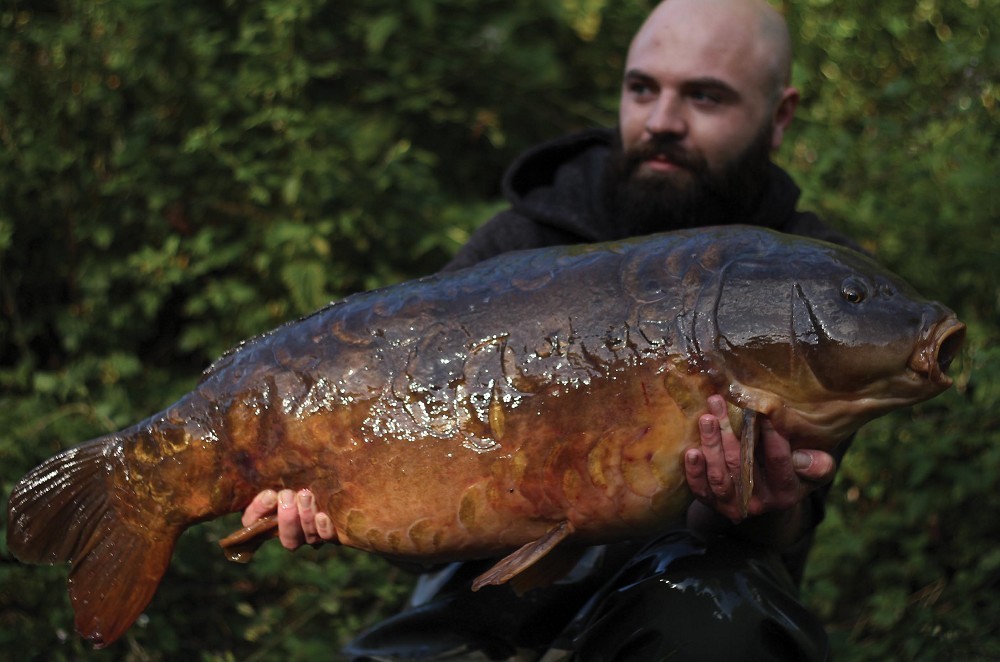 4. Paul Eaton
Paul Eaton landed this gnarly, chestnut mirror aptly named Apple Slice back in 2015 at a weight of 40lb 2oz, and is thought to be well over 40-years-old and was one of the few carp which remained in the lake from the original stocking. It was only the first season Paul had fished the lake and this relic was caught on his 29th night after arriving at 8pm and completing three laps of the lake before settling on the chosen spot which produced the most memorable of bites at 5am the following morning. 5. Alan Cooper
This phenomenally perfect zip linear known as Sandy is held here by Alan Cooper and was part of an incredible result for the venue where Alan was able to land four of the venue’s A Team in only five weekends of fishing. Not only is the linear line on the fish simply outrageous and pops superbly with the misty backdrop, but its beautifully rounded small fins somehow manages to add even more beauty to one of the best-looking fish carp of all time. 6. Wijnand Van Hemert
Around the year of 2000, there was an article in a Dutch publication which contained a large unknown fish. It may have been big, but the rich brown hues and chunky scaling were so extremely unique on the fish it appealed to many Dutch anglers including long-time carper Wijnand Van Hemert. This great mirror was later named Bella Betsy and was one of five carp which lived in the 60-acre venue and Wijnand was to land it in November 2008 realising his dream with this wonderful image helping to keep the memory alive.

7. Stu Harris
It is very rare to see an angler holding a carp which is well over 60-years-old, but it is also much rarer for a carp to be so old yet so attractive. Records have revealed the history of this magnificent mirror, which was stocked into the venue in 1956 as a yearling. Stu Harris managed to trip up this senior resident back in February 2012 only inches from the bank using luncheon meat and is a capture which will last with him forever.

8. Tim Crump
The big and beautiful carp which have been caught in England have historically been well documented yet there are some fish that have been little published which really do need appreciation. Tim Crump banked this sensational big plated mirror as a result of watching the fish in the water on many occasions, wondering how incredible it would look on the bank and proceeded to cut a swim out having forged a plan. Fortunately for Tim his hard work paid off in fine style! 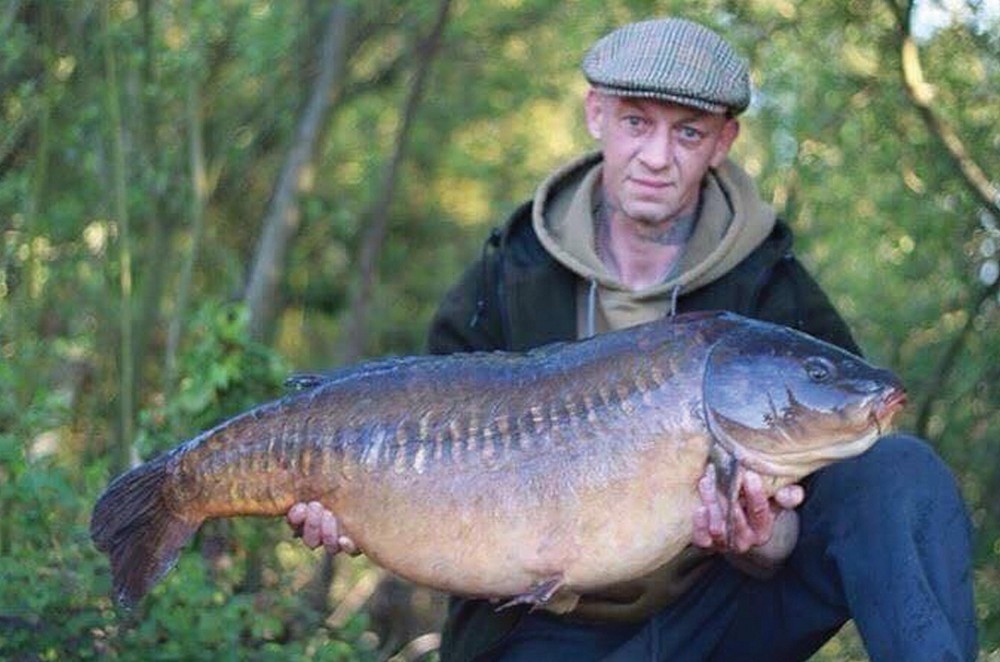 9. Mark Goodwin
Mark spent two years from the year of 2012 to hunt the carp of his dreams. A swim was baited with only 20 baits a day compared to that of the anglers who were baiting very heavily. Instead of competing, it made sense to do the total opposite (fine angling indeed) as the fish had seen the bank very few times. On May 1}4th 2014, during a full moon phase, The Big Lin saw itself in Mark’s landing net and at 38lb 10oz. Understandably it was a carp which meant so much to him. 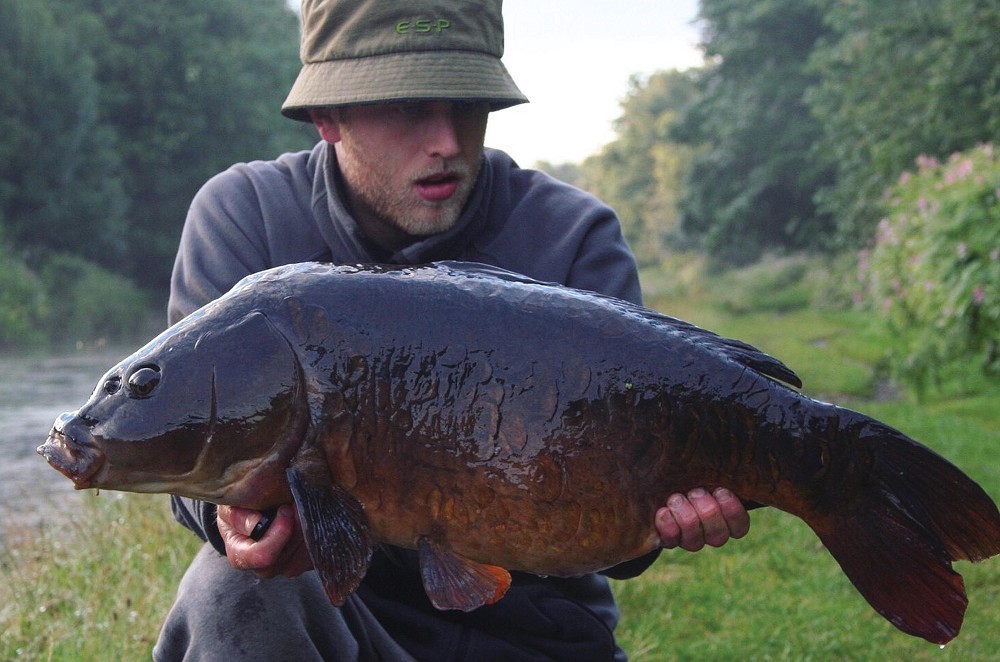 10. Jonny Chadwick
There may be many featured in this list from the South of England but there are also some jaw-dropping carp caught from the North which have rightfully earned their place. This fine carp caught by Jonny Chadwick is as black as your hat, perfectly proportioned, double row linear, featuring additional sovereign scales running along the length of its belly. As Jonny says, “Weight is totally irrelevant when they look like this!” 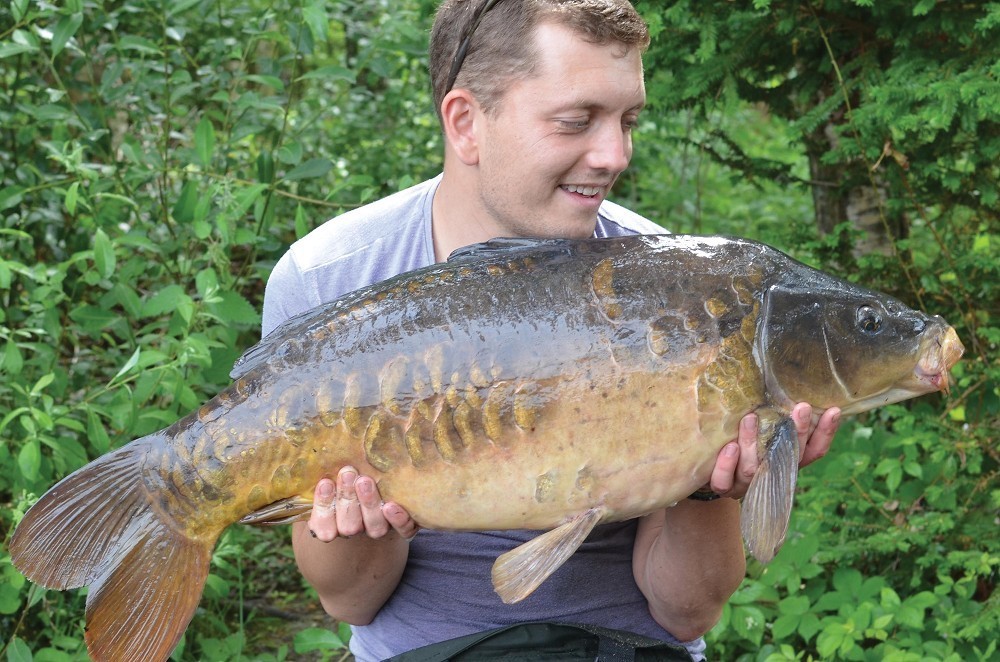 11. Harry Lansdale
This one really is something special and this fish has to be one of the most perfect examples of a carp we have ever seen! This Leney, when caught, was one of the oldest fish swimming in our waters, weighing in at 27lb. It was given the name Baby Double Row which was the last of the true genuine Leney strain carp in our English waters. Many anglers claim to have caught this strain of fish, but unfortunately many claims are false, whereas this is as genuine as it gets. Stunning. 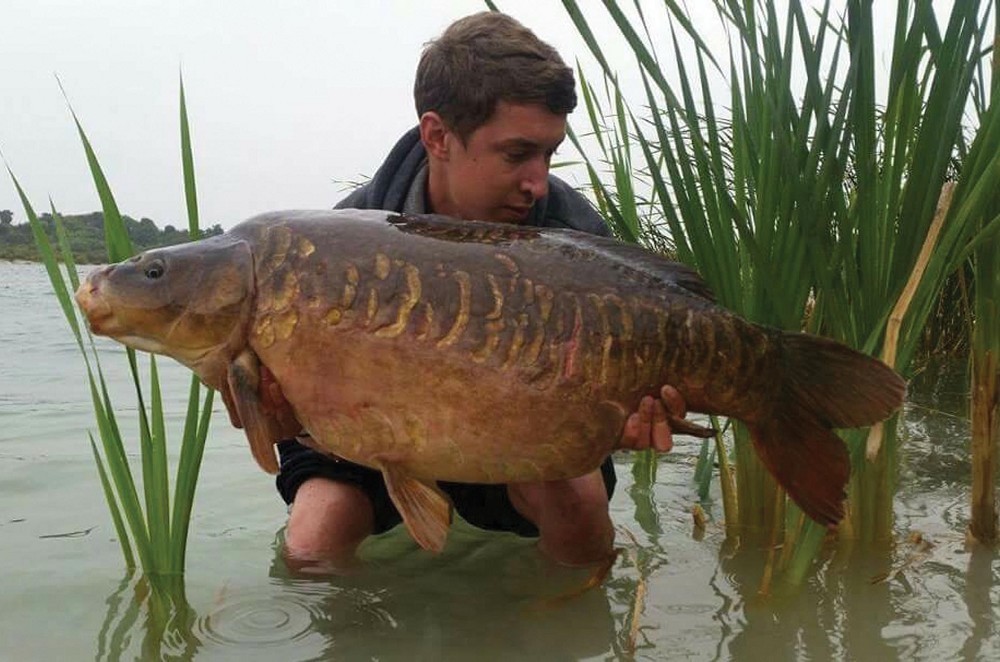 12. Tom Klamut
Tom Klamut managed to outwit this gracious English 41lb linear in recent times from a Southern venue fishing over a very underused bed of bait for this present day: the good old faithful chickpea! Going against the grain (literally) and fishing completely differently to others proves itself time and time again and with the addition of using an old school bait it continues to fool the most quality of carp still alive today. 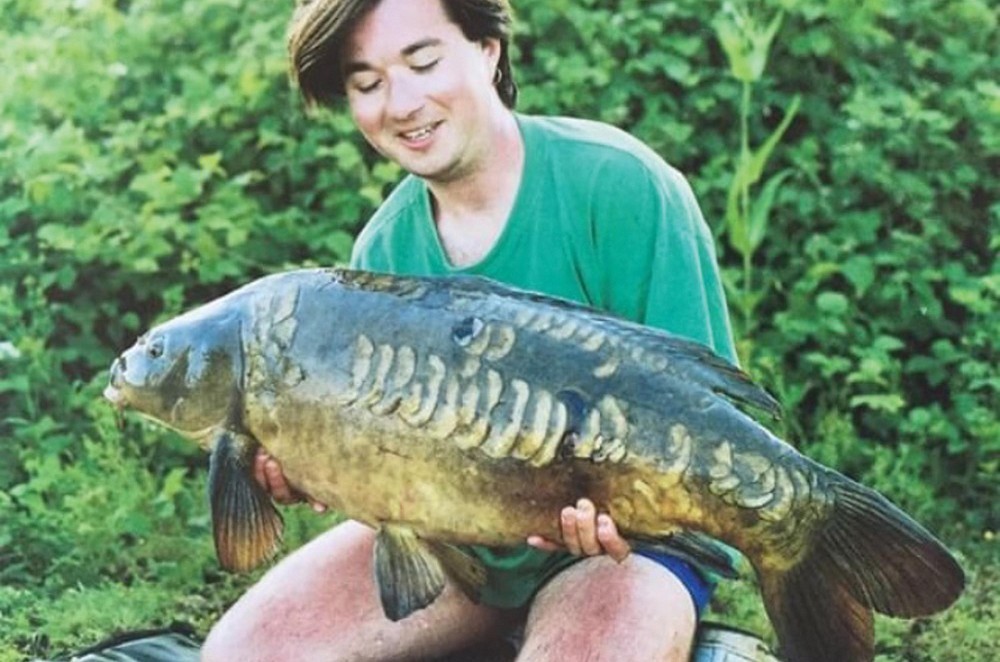 13. Jason Hayward
We’ve all read and heard multiple stories of the great fish which lived in the iconic Colne Mere - namely The Black Mirror. And whilst that fish was King of the pond, every carp caught from the venue was to be treasured, as many of them were hard-earned and each one totally unique to the other. Jason Hayward didn’t only catch the biggest mirror in the lake but also some of the most attractive with one of them being this lesser known beautiful linear weighing 35lb 12oz who was only caught a handful of times. 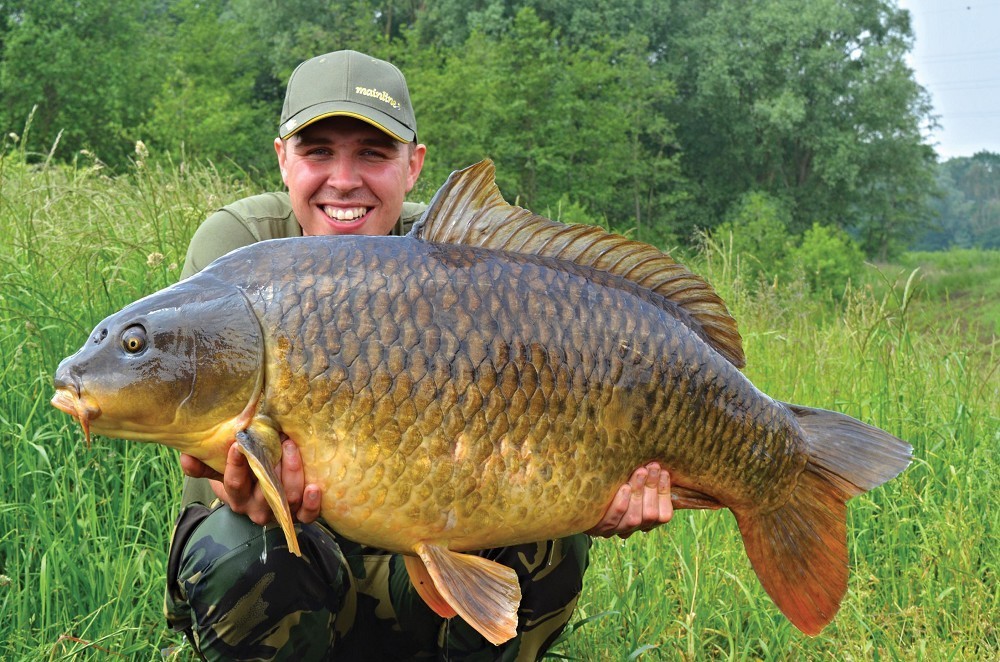 14. Ben Austin
For us at Our Love Of Carp, a very big common is extremely hard to beat. The pictured fish is one cracking example that lives in a notoriously difficult water in Belgium which hit the scales at 51lb from a very hard water. The fish was a myth, and nobody believed Ben when he caught it as the fish was uncaught for six years. This mean-looking common is one of the many reasons why Belgium is quickly becoming a popular destination for carp anglers to visit and it sure is tempting isn’t it?! 15. Credit to Phil Tibbs
This is a fantastic brace caught by Phil Tibbs. The two heavily scaled mirrors were tamed from Dartford Lakes in 1980 which have since proved to be a mecca for big and beautiful carp. Peanuts were the bait of choice and it’s still amazing how very few people use peanuts these days… Although those that do, and keep it under their hat, have certainly reaped the rewards!

16. Ian Chillcott
There are some carp in particular which you see photos of that are unlike any other carp you have ever seen and this one caught by Ian Chillcott is certainly one of those. As featured in his second book entitled Light My Fire this carp was featured on the front cover, so it must really be a special one. When Ian caught this 37lb 2oz mirror he says it was totally unknown, which does make you wonder what else is out there! 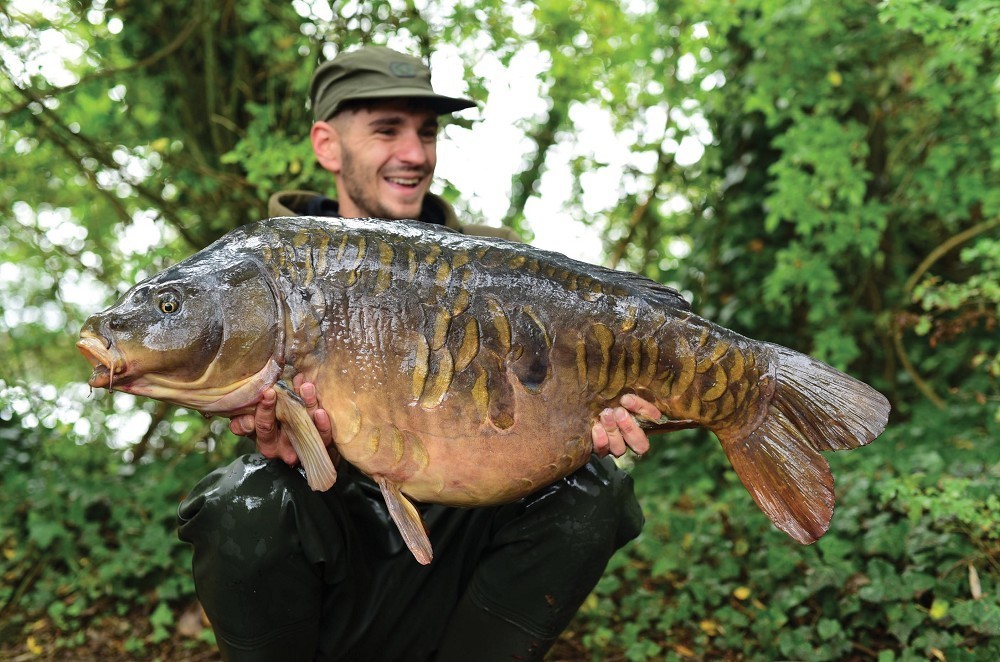 17. Jacko Lucy
This mega mirror carp known as the Big Scaly was its first capture of the year, weighing in at 43lb 3oz. After seeing bubbling in the shallows, Jack climbed a tree to find both the Big Scaly and the venue’s biggest resident together. Having seen this, Jack quickly moved all of his gear onto the new plot and set-up awaiting action, and action is what he got the next morning! At 10:30am the take came and with the fish weeded itself up, it meant launching the boat where an epic battle followed. 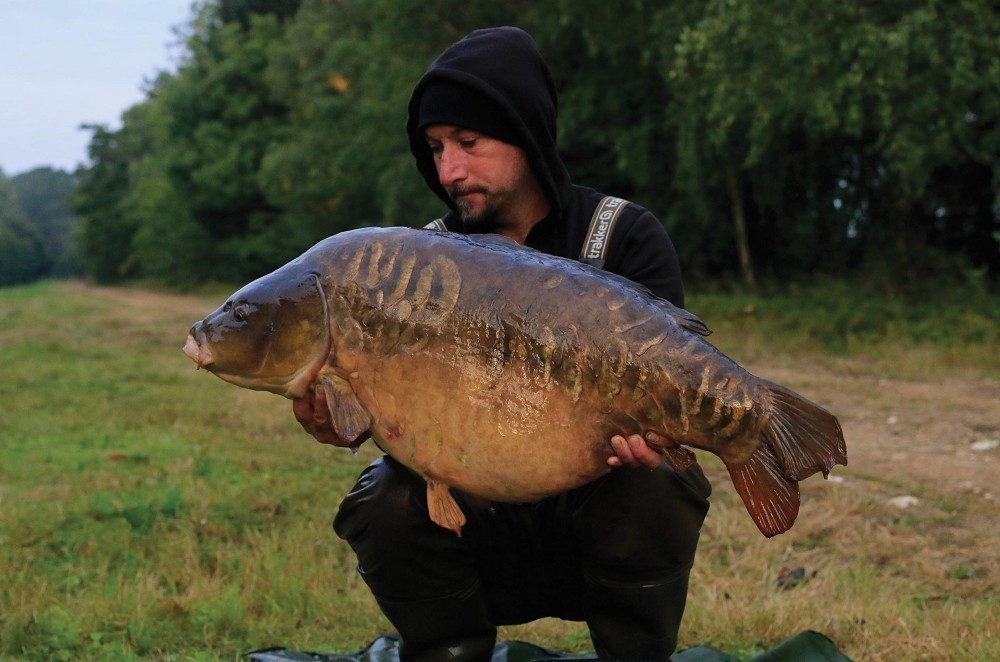 18. Lee Walton
Lee Walton caught this spellbinding chunk and heavily scaled mirror on his first trip to a Lincs syndicate. Lee had seen a photo of this very fish 17 years previous to the capture but once he got offered the ticket which held the sublime creature, he wasted no time in holding it up for the cameras. Truly unique! 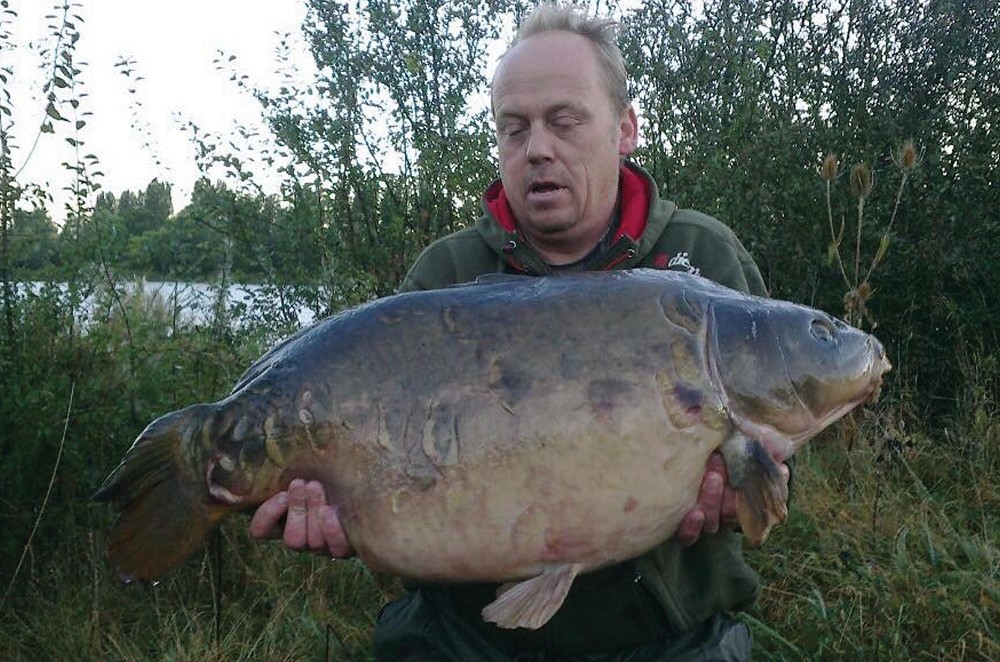 19. Stephen Clark
Johnson’s Railway Lake is steeped in carp fishing history which has produced some of the country’s finest and most sought-after carp to date. The great Railway Leather was one of those which has already been posted our Facebook page, but here is another that some may not be aware. It’s as equally as special and is a fish that went by the name of Floppy Tail. Stephen Clark was one of the lucky few who had met this great carp at a weight of 34lb 12oz, making it one the biggest weights the fish had made some years back. 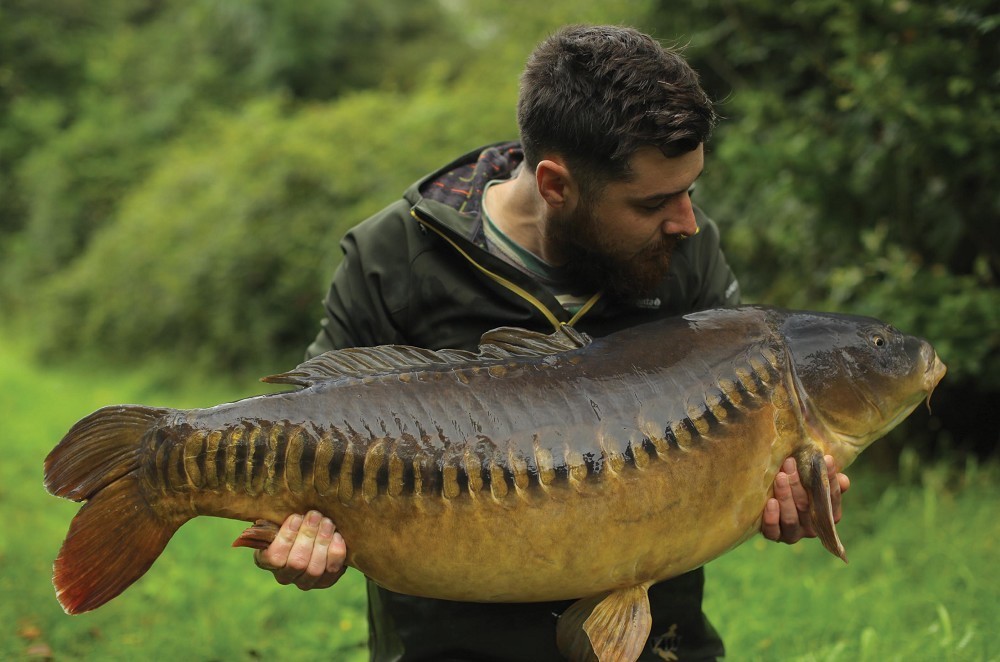 20. Chris Beasley
Having been away from the lake for two months because of heavy weed and algae, Chris Beasley returned to his target water. After two blank nights a move was considered for the third but instead had chose to sit it out and fortunately the decision paid off in incredible style with the capture of this unreal 47lb linear. Even more incredible, is this fish has only seen the bank a few times and is estimated to be 4ft long!