Well my friends, what’s being sent down this month? Personally, dental floss that looks like PVA is currently high on my list (I’ll let you fill in the gaps there), but that pales into insignificance behind this period of time: the best fish-catching months of ‘em all. Okay, September to November run it a close second, but the period covering the awakening of the semi-dormant mud pigs to their shag-fest marks probably your best chance of sticking some metalwork in your chosen adversary for the year. So why consign it to Bivvy 101? It’s the days of angling that now obliterate the ‘old’ close season.

Yup, I want it back. I’ll apologise to the angling trade in advance for sweeping three-months of profit off their bottom line, but that enforced three-month period of ‘no you don’t’ made the ‘yes you can’ all that more joyous. While we were all invariably premature and shot our bolt (rigs) before midnight, the glorious 16th made us all feel like a virgin at a Christmas party; a kid in a sweet shop; a fox in a chicken coup or a razor at the north end of a Brazilian.

You’d spend three solid months of furtively peering through trees at potential and known waters, like a gecko (in polarised lenses) at an ant’s nest. You’d restore and replace your tackle, grease reels, gloss rods, spool lines, buy the latest cods-wollop and slide a new mucky book into the pocket of your seat box. You’d become an animal, striving at every opportunity to get your fix and annul the heightened senses that the close season guaranteed.

By the time the season arrived you’d be sitting in a pre-baited swim, your temples bulging with the anticipation of wetting a line for the now relaxed and unsuspecting ignoramus of the deep. Your rods would gleam with love and polish, perfectly horizontal. Level bobbins would hang expectantly. Suddenly the moons would invariably align and you were complete, a potent superhero in army greens. Sadly, by 12:15 you were blanking again.

But now I guess, if there was a close season, lakes would be 3ft above the seasonal water-level with pre-bait; full-timers would live in ‘hot’ plots, leading every day to see when the weed started to go and the spots hardened-up, taking cameras by boat to check the baited spots, spodding three times a day… 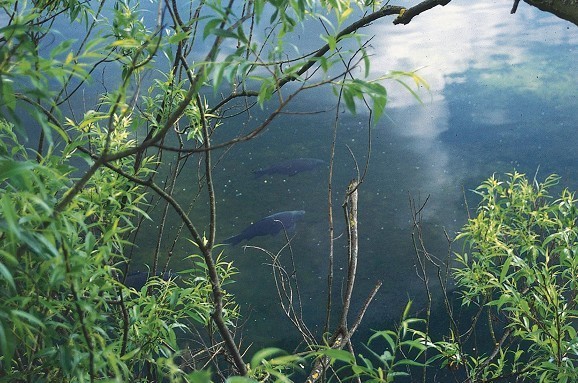 No, no, no, not spodding. ‘Spodding’, as part of the carp-angler-at-large’s armoury is the second most efficient way of getting bait from A to B there is, don’t get me wrong. ‘Spodders’ make that ‘A’ stand for ‘Arsehole’ and the ‘B’ for the balls-up they’re making of their swim; and potentially yours. It’s all a question of etiquette you see.

‘Spodders’ have the lowest boredom threshold of any creature. More than an hour without a bite (I nearly said ‘boat’, strange huh?) and you’ll hear the primeval roar of the bucket lid being peeled, like a dinosaur having a tooth removed, anally. Then the swoosh of the dildo-like missile as it does the first of its ‘warm-up’ flights to its destination. Christ, I nearly forgot that the destination has to be determined first.

Multiple casts with an invariably bespoke marker rod (named after a missile or perhaps a machine gun) until the orange finger of a float stands in the swim, as a one fingered salute to decorum amongst anglers. Then ‘badoosh’, or perhaps just ‘pap’ as the phallic (posh for ‘like a cock’) missile lands one-third of the fishing distance from the marker. This distance can easily be calculated using Ballix’s theorem. Plus, of course, all of the above noises can be multiplied by 10 if using a Spomb; which I do, but I still grimace, shut my eyes and look away when it lands… Which helps.

Then, our hero will continue to spod, NOT to achieve a pre-determined baiting level; NOT to enhance his baiting strategy; NOT because of fish movements. He’s done it until he feels placated. Relieved that he’s burnt-off a little more testosterone until he gets bored again, safe in the knowledge he’s lined Mr. B. Barons pockets with the profit from another 5kgs. Then, he’ll reel in all three rods (also named after guns or rockets) and cast them back out onto his ever-growing and never-diminishing bed of spod mix, plus the invariable ‘little something extra’, which will be salt. If only Kevin had told him to add semen. His left arm would be rendered a claw and his right arm a pink mist and he would be able to pick up that bloody spod. But he wouldn’t be able to get the lid off the bucket, which may be messy.

With the advent of digital cameras and the software that’s usually supplied with them, or freely available, it’s now well within everyone’s ability to ‘enhance’ the colours of any photograph, or indeed, any image, taken from the web. While I’m all for this, and there’s some incredible lens work appearing in the carp fishing fraternity now, championed by this mag and Gareth’s beautiful SubSurface. There’s a raft of anglers who are out there ‘doing it’ with both rods and lenses. You see, if you shoot in ‘RAW’, you’ve got the ability to tweak the original image colour and tonally. And RAW is the format to do it in. Jpegs are okay, but RAW is the daddy.

Now, I’ve got no problem in people ‘pulling’ the image a little. Indeed, I’ve no problem in people maybe re-touching the odd stray blade of grass. But the trouble is, people are trying a bit too hard. (We’ll ignore grafting other people’s captures on to yourself for competition entries!).

We all aspire to catching beautiful mahogany mirrors and jet black or old gold commons, but if you don’t get one, no worries. But please, don’t try and polish a t…t…tonally pale fish and turn it into a dark one… You’re fibbing! You see, there’s a ying and yang about photographic manipulation in-so-much as that what you add, you take away from other areas. What’s blatantly obvious is that more and more anglers have colour adjusted their catch shot until the fish boasts chestnut hues cascading into swathes of russet and gold, only to make their face look like Elvis straining on the khazi in the initial throes of a clutcher. (He died taking a crap you know? Apparently constipated from his favourite delicacy of fried white loaf filled with burgers. Not the easiest curl-out, uh-huh.)

So there’s our new ‘Terry’, brandishing a carp carved and polished from dark woods and oils and the gurning captor with a face head like a bell-end at a knocking shop window in front of luminous green trees and glowing red logos. Psychedelic it ain’t, bollocks it is. 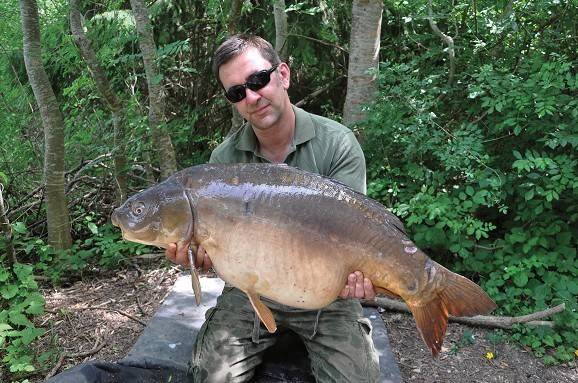 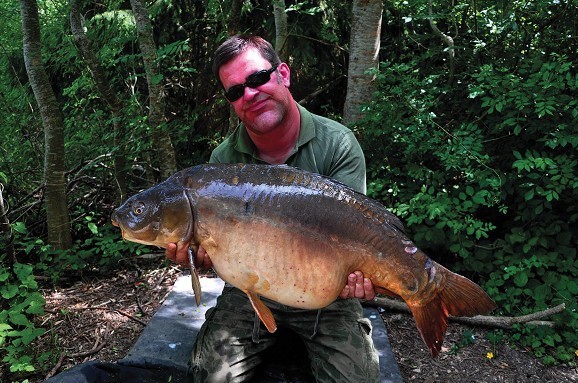