Mrs Andy and Mrs Simon let us know what they've been up to in July in Carp Letter from America...

Carp Letter from America is fun to put together. The blog allows us to get our catches into perspective whether we think we’ve been doing well one particular month or whether we’ve struggled. The articles also allow us to delve a little into the psyche of the American angler and the American public’s relationship with the great outdoors. But that said we thought it might be interesting for the CARPology website readership to hear less from us droning on and more from others who either fish or have a different perspective on this American carp fishing lark. So for the next couple of month’s at least we hand over the reigns of CLfromA 2016 to some guest contributors. First up are a couple who have suffered the longest at our carp fishing hands, Mrs Andy and Mrs Simon. We shall now retreat to the local pub.
Andy and Simon.

As our gardens parch under July’s incessant sun so, conversely, our men folks’ thirst for carp appears temporarily slaked. It’s not that they’ve grown weary of pre-dawn departures or all night lakeside vigils, neither is it a desire to bask in the delights of our company. No. Apparently the carp are less active, or hungry, or have gone on vacation; something along those lines. Consequently the men may be more physically present but, mentally, they still inhabit some distant bankside and their high-jacking of conversation persists.

Mrs. Simon: “You’d think Donald might do something with that hair”.

Mrs. Andy: “And the tango’d complexion”.

Mrs. Andy (chuckling): “I’ve heard that they appear quite large when he’s handling his terminal tackle.”

Andy (distantly): “And why are we catching so few fish during the night?”

Mrs. Andy (hesitantly): “So… are the fish asleep then? Do they actually sleep? Or…. can they not find the bait in the dark”?

Simon: “Well, they do sleep, but not quite as we understand the process. In fact what’s more interesting is whether they dream.”

And so the discussion on Donald Trump’s finer attributes had been bush whacked. Indeed even a game of cards with The Neighbour, once a carp-free domain, can no longer be trusted since he was turned from his short rods and fixation with bass.

Things are a little different here in the height of summer though. Our largest pans are not constantly employed in simmering great vats of maize, or left in the garage encrusted with budget birdseed. The weekly shop no longer necessitates two trolleys: one whose contents are for human consumption and a second for the carp’s, the latter provoking strange looks from the supermarket checkout lady as we peer out from behind a tower of a dozen slabs (one hundred and forty four cans) of Wegmans’ finest sweet corn. “Y’all sure like corn chowder” being a common greeting from the till. 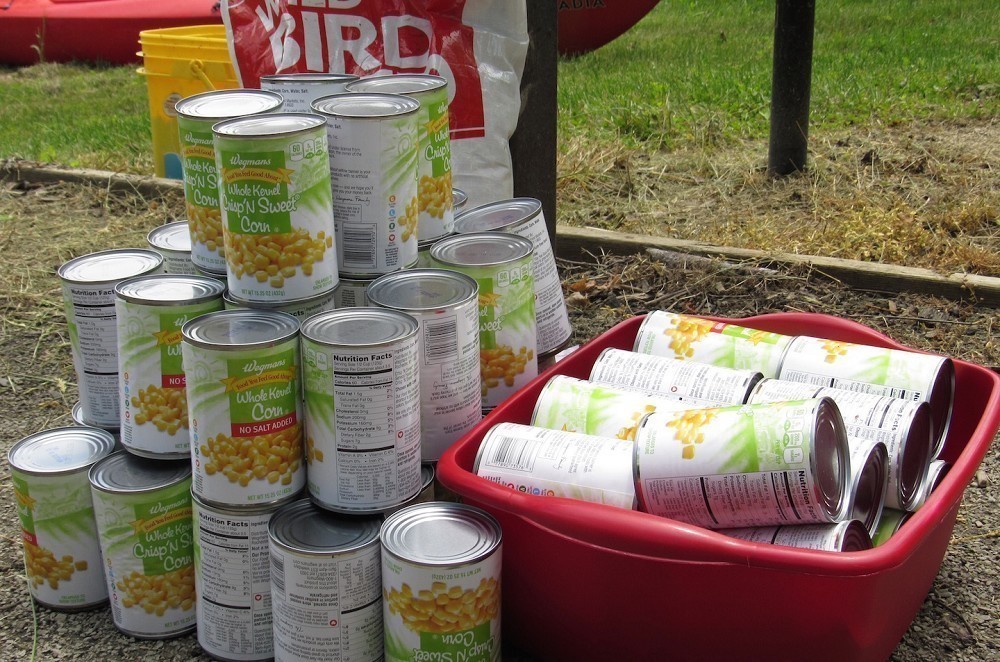 At least Mrs. Andy’s grocery bill isn’t quite as swollen as Mrs. Simon’s bloated as it is by the cost of hemp oil, condensed milk, belacan and tinned tuna all destined for some of her husband’s more eclectic base mixes. For once the cars smell less like Billingsgate, the kayaks less of vomit (putrid sweet corn) and our husbands less generally. That’s not to say the impact of the husband’s hobby isn’t visible at home. Mrs Simon’s kitchen bears many marks of her other half’s attempts not only to relive the past but to also catch up with the future. One cupboard is now full of half finished dog and cat food packets witness to Simon’s effort to remember just how he put together the pet food pastes of his youth. Scattered elsewhere are strange additions to the flour cupboard, soy and semolina, as well as various tins of beans and peas, flavourings, colourings and oils none of which the family would normally consume. Then there is the gradual invasion of the garage. What once was space for the mower and the strimmer and a neat area for the fly rods has now been taken over by an array of carp rods, stinky nets, bags and the odds and sods of the carpers trade some of which would look much better on the shelves of a store selling very different pleasure accessories. The mower and strimmer now gather cobwebs in a distant and wholly inaccessible corner. And there are, what might only very generously be called, the ‘moments of inspiration’. These are the various attempts to make a ‘cheap’ landing net handle and a home made set of banksticks the prototypes, offcuts and remnants of which still litter the place.

All that said you’d think we’d be rather happy with this heat-induced hiatus even if it hasn’t seen the return of our hair-bands (rod butt securers), hair-grips (home-made bobbins) or spare washing-up bowls (mix receptacles). But, in all honesty, we’re not. We both (and Miss Simon’s 1 & 2) love the outdoors and the American State Parks and Forests are very fine indeed. 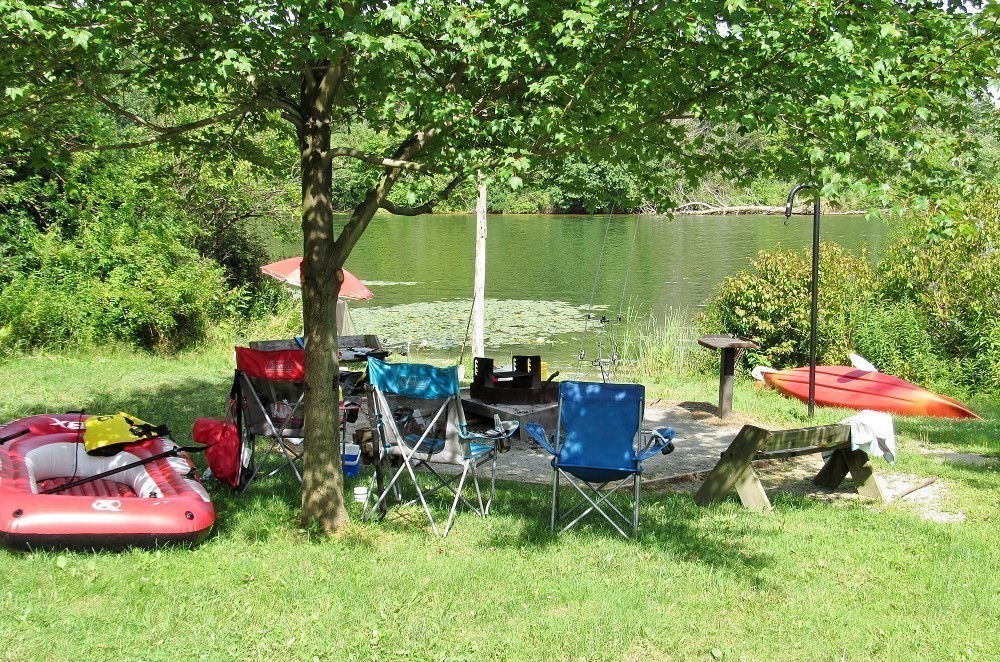 Family-friendly grounds of a lake-side cabin

Camping here is a joy. The excellent pitches all have fire pits and trestle benched tables with spotless washrooms close to hand. Heck, sometimes we even get to splash out on a cabin – lakeside of course. 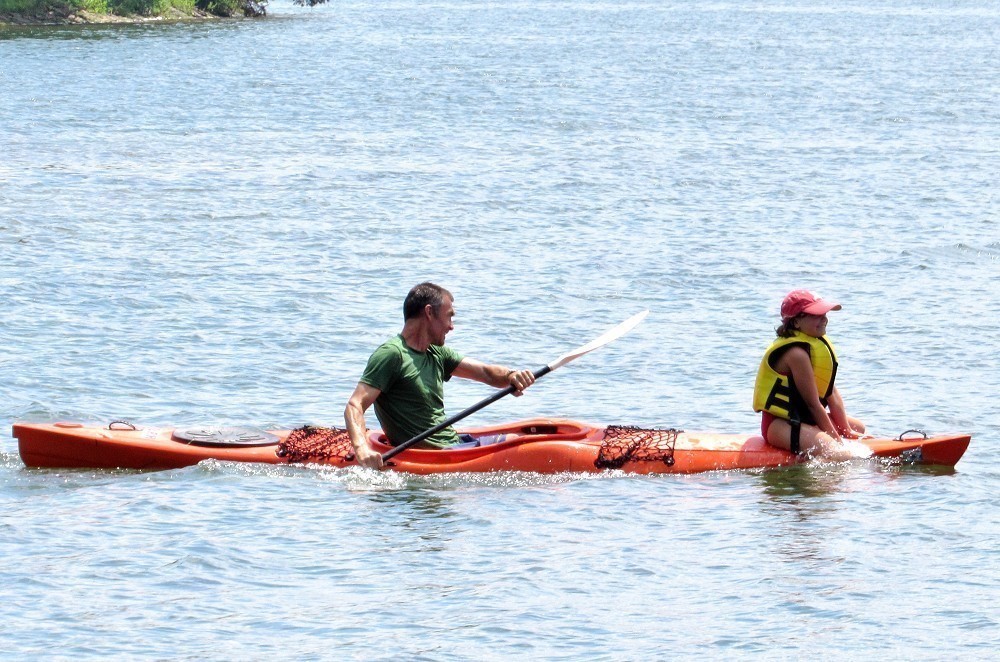 There may even be time for non-carpy activities

The lakes are perfect for kayaking and swimming (obviously not in the swims), the trails wonderful for roaming or an early morning run. And then at night you are serenaded by cicadas, bull frogs, crickets and owls as well as the rattle of tins in the rubbish bag as the raccoons rummage for leftovers. It’s really no great chore joining Andy and Simon on their excursions. 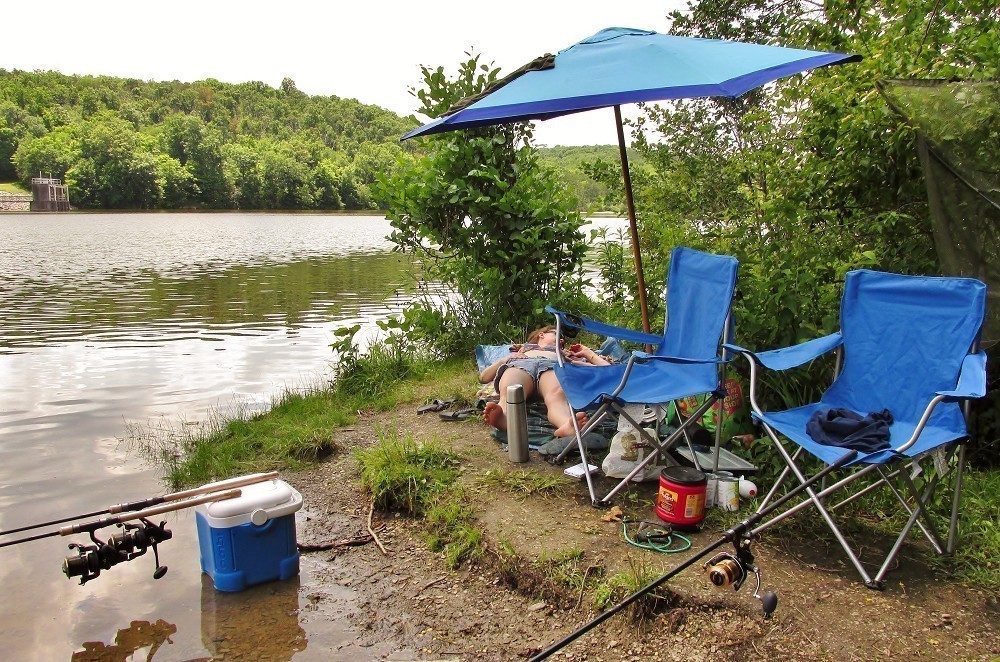 Indeed Mrs. Andy herself has been known to wet a line. Admittedly certain climatic conditions need to be met for such an eventuality. If a bikini can be worn then a rod can be cast. Her PB may be a modest sixteen pounds, but she specialises in catching those of an edible size. And on this point the chaps were absolutely correct. As noted in last month’s article these carp really are rather good to eat. 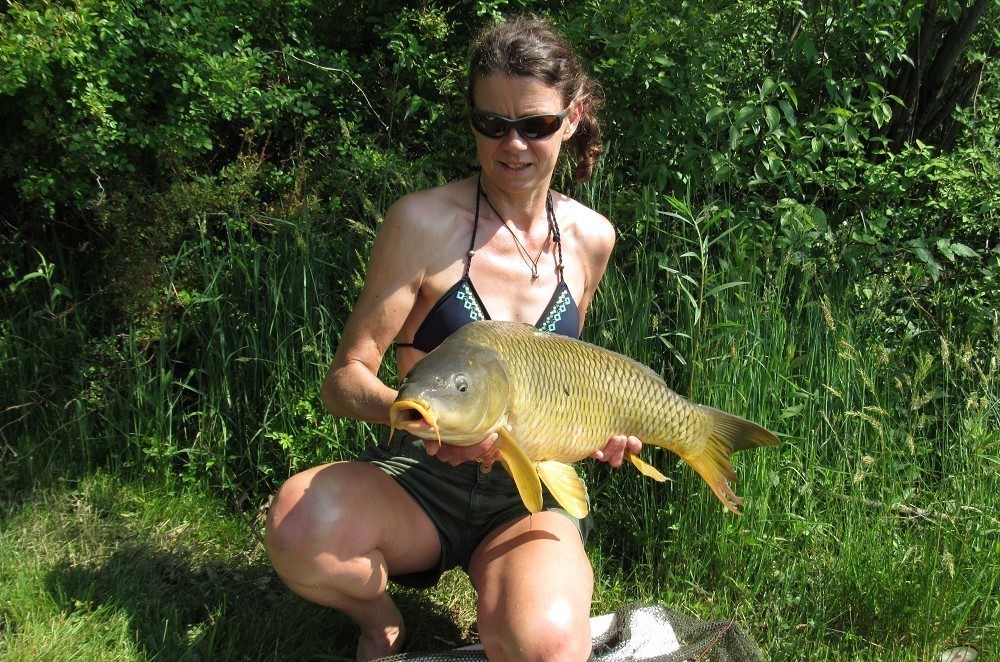 A tad too large for the pan

On other occasions Mrs. Andy’s participation has been less of a personal choice. You might remember from May’s missive that the first trip of the season to The Other Lake found the carp carnally occupied with a distinct disinterest in feeding. Nonplused the Simons departed leaving the Andys to the dubious buzzer-free silence. Several hours later a restless Andy decided to kayak over to the spawning grounds and snap some pictures for the blog. “Don’t worry about the rods” he assured, “if one goes off it’ll be a miracle”. Away he paddled and back to her book went Mrs. Andy. Ten minutes later a solitary bleep. Mrs. Andy sat up and eyed the offending buzzer suspiciously. Thankfully nothing materialized. She lay down again just as the constant screech initiated. Jumping up she reached the rod and tightened the clutch (rather pleased with herself for having remembered this little necessity), she raised the rod and felt the fish pulling firmly. It was big. Where was the net? Ha, she’d have it played, landed, unhooked, weighed and sacked all before his return. Back in her chair she’d nonchalantly bring his attention to the rather full sack and enquire if he could take some photos of her fish …. a big fish. It was all going swimmingly, until the fish began to power towards the lilies. Too late, it was among them. Then another bleep that quickly became a series of bleeps. The fish was nowhere near the other lines. Oh surely not, another frigging fish. The first was stuck. What to do? Loosen the clutch, put the rod back on its rests and grab the other rod. Christ! This fish had panned right and crossed the third line whose buzzer was now adding to the mayhem. She thought of crying out, maybe another camper could come to her rescue, offer some advice? Mrs. Andy pulled herself together and tightened into the second fish, it too was now deep in the pads. However, several hundred yards away an orange kayak – Andy – was approaching. She waved furiously with her free arm, but he was oblivious scouring distant bays for signs of activity when all the bloody activity was here, the numpty. At a loss she loosened the other two clutches, replaced the rods and sought out a beer from the cooler - bloody miracle indeed. 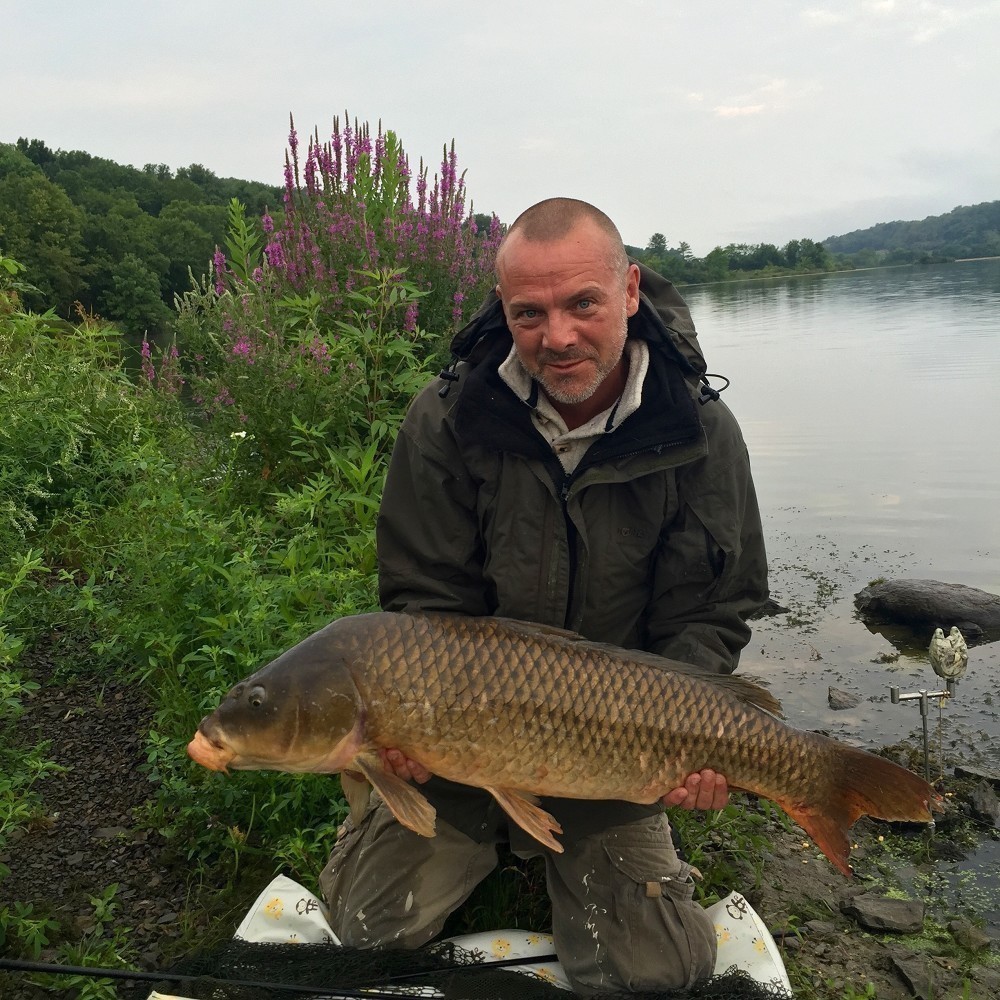 The Little Lake produces for Andy.

The boys did get out for a couple of trips this month. Andy took the Neighbour to The Lake and banked the obligatory pair of twenties. He then took Simon to the Little Lake, a water they’ve apparently neglected this season and one which Simon, judging from his sour demeanor on the few occasions they have fished there, has yet to catch from. Apparently they dozed throughout the night until Andy snaffled a good fish in the early morning gloom. Simon returned with his sour face unchanged.

Being the wives of carpers is, as many in the UK will attest, a trying occupation at times. The, how shall we put this, interesting smells, that sometimes fill the kitchen and permeate through the rest of the house. The regular disappearance of various items of kitchen cutlery and not least the incessant chat about rigs – a term we still don’t really understand. Don’t you just tie the hook to the line and add bait? How hard can it be? But despite these minor inconveniences we’ll still support our menfolk in their continued quest for an American forty. We gather this may take some time but I’m sure this doesn’t really bother them. And thinking about it, it doesn’t bother us either here with the open spaces and large waters of the United States of America.