So what's Regan's beef this month? Well, that would be plenty of tips – pukka ones at that, plus a proper funny. Enjoy...

When I finished my last article, I left you with a tackle tip, but to tell you the truth, I never finished it as I intended to when I first started writing the tip down. As I said, most of my fishing is done away from home. (I don't really talk miles, I talk 'CDs'. Some one says, 'how far is that water away', I reply, 'two CDs, three CDs' or whatever).

Now the tip I was going to say originally was that I find it very handy to have a small holdall in the van that I keep odd bits and pieces in. Things such as a spare stove, cutlery, brolly pegs and all the other things that you may forget to pack or lose. I also have spare line, end tackle components, hot water bottle, spare clothes and Powered Milk. I've even got a first aid kit that is made up of odds and sods put into a small container. You get the picture you can put allsorts in. That way I haven't got to lug mountains of gear around the lake, but I'm covered for most things. I always keep a spare lighter in with my camera gear that I always carry with me and so it goes on.

It has come in useful on several occasions for both my mates and me. In my holdall I've even got a couple of cans of food just in case I stay a bit longer. Although nowadays a lot of you go and get a take away from McDonalds or the Chinese.

Now when I think about it, he has done really well for himself you know. When I was at school, old McDonald had a farm, and on that farm he had a dog. I went off to sea and before you know it, he's got a chain of food restaurants. 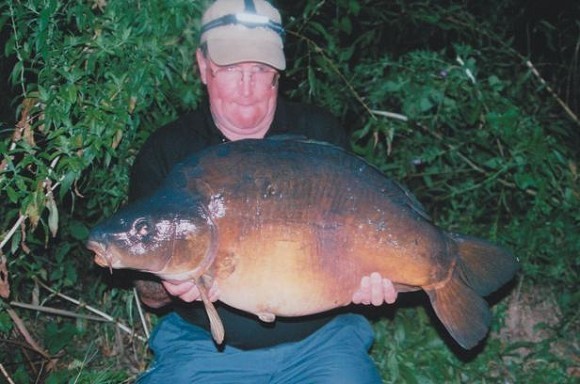 Here's another little tip that may help someone. I did this myself years ago. If you have targeted a spot that you are going to bait and fish in the future, attach some of the main line you are going to use to a lead or even stone and put that into the swim and start your baiting around it. That way you can get the fish used to lines in the swim.

I remember that a local lake that I was going to fish on the marshes near to my home I even attached the bait to the line by threading it on and putting that in by hand and I had fish pulling the baits off the line. Do you know what? This is the honest truth, I didn't even fish it after all that work. Some times I enjoy the mucking about just as much as the fishing.

Just a word of warning: don't leave any line were it can offend other anglers, or more importantly, tangle up on any wild life. Put the line into the water and the end attached to a stick or what ever pushed into the margins under the water. (That way you benefit two ways: one nobody sees it, and two, and more importantly, it doesn't tangle up wild life.)

Let's just mention the wild life here. Don't forget you're on their turf, that's where they live. Most of us are just visitors. Although some of us do a bit of time, if you know what I'm saying. I know one or two anglers the only time they hear a women voice is when they need a top up on their phone. Right back to the wild life. When you're out, put the odd fat ball in the trees and a few seeds about for the birds. It would be a sadder place without them. Now this is not just a casual remark and I really mean this. All the best anglers I know (and I've been about a few years) have got a lot of respect for the wild life around them and a lot of them are very knowledgeable on the subject.

While I was out last trip ashore fishing with Tom Banks, he told me he had forgot the numbers of real whackers (and he's had loads) he had caught by just observing the action of the coots staining their necks and looking down into the water, backing off from something and so on. Of cause we have all heard them call out among themselves at night when a fish crashes out. A real bonus on a big water.

So you can see it helps to be in tune with what's going on around you, and you will find it much more enjoyable. One of the most knowledgeable anglers I know on birds and wild life is Albert Romp. So it just goes to show you haven't even got to be that bright. 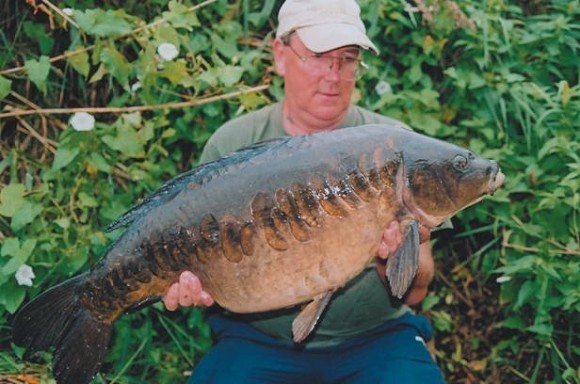 Another wind up - MEGA!

Have you noticed how I'm being all sensible this time? I've got to really, otherwise I'll have no friends left. I was off to a garden centre with Maureen last trip ashore when my mate Les Box phoned me up thanking me for the reference I made about him needing a hip replacement because he played with himself a lot when he was younger.

Apparently he was in his local pub playing dominoes when the barman read that part of the article out! Everyone in the pub knew what was coming except Les. Dominos Les? What's all that about, you should get out a bit more?! When I come to think about it, it's joining dots together. You always used to carry a book about with you joining dots together to make a picture. You then progressed to joining the spots together on one of your old girlfriends bum. I remember you telling me you got a picture of a tractor once, although you did say the front wheels were already there. (Les, I think they were the back wheels mate.). Dominoes? You're getting old... The next thing you know, you will be sitting by the window with a rug over your knees making pictures out of a book again.

Do you know what? Last trip I joined the spots up on Maureen's bum and I got a picture of a farm yard with all the animals, a combine harvester, several other bits of machinery, a lovely farm house and all the outbuildings, a really beautiful sunset over some trees and on the other cheek I got... hang on, I think I'd better stop there, I'm in enough trouble already! Last time I went with her clothes shopping, she said, "Does this dress make my bum look big?" I said, "No, pies and cakes did that!"

Have you seen it?

Have you seen the new number five Underwater DVD from Korda? I found it really interesting, and it brings home several things I've been banging on about for years: clear spots making it harder to hide the tackle and easier for the fish to suss you out and feeding one bait and fishing another.

If you want to fish different bits and pieces for whatever reason, fish lots of different things and make it really difficult for them to avoid the hookbait and I'm talking different particles, maggots, groundbait and so. It goes on all common sense really; make it as confusing and difficult for them as you can.

One thing that I did pick up on, and as a logical thinking person, I was a bit disappointed that I didn't think of it long ago by myself, was baiting before I cast out. Let me explain... When I go about selecting where I am going to fish (especially on short sessions), I like to pick an area where I think the fish will be using throughout the day (they haven?t necessarily even got to be there yet. If they are not, you can prepare the swim without disturbing them). Areas such as sunny bays, weed or snags where, if you disturb them, they will just lay low for a few minutes and not clear of.

So what I plan to do in the future is, if I know the spot I want to fish to, these distances will be marked out and recorded in my notebook, and it will then just be a case of measuring the line out using my line counter. I do this by dropping my lead on the ground and walking away with the line going through the line counter until I reaches the required distance. Then I just clip it up. I will then bait the area first, so that if I do disturb any fish, it's with bait. They are much more likely to come back and investigate the baits than they would be to investigating a rig. I will then just plop my rig on the spot. That way the fish will at least know there are baits in the area, but they may not know a rig has gone in.

Remember to always enjoy yourself it's only a day out. Success is not the key to happiness. Happiness is the key to Success.
Pete Regan