Travels With My Carp Rods #1

Our travelling carp writer recounts a tale of a German pair in the throws of passion; hot water; and the world's fastest travelling hedgehog

You may have read last month about the 'deer incident' and the subsequent 'trouser incident'. I was discussing the events with a mate who reminded me about the 'hedgehog incident'. I would call it "Fun with animals in Holland", but I've seen that video and it's not funny, not in the slightest.

Millions of years ago, before Korda, myself and a mate or two would make the yearly pilgrimage to fish the Twente Canal in Hengelo. Now, long before the Gigantica's, Cassien's and Rainbow's of the world threw a long shadow in the carp world, anglers from far and wide would travel to the waters of the Twente, artificially heated by the Hengelo Akso Salt Factory. The canal was stuffed full of carp, mainly commons, topping out at around 30lbs. Twenty-five years ago these were comparative monsters, and to be able to have multiple hits put the average Joe in dreamland.

On my first trip over there, we'd bought the necessary permits and arrived for a recce at the factory stretch. It was a latrine! On the opposite bank stood a huge industrial unit, feeding ship salts as they stopped by. The unit bellowed smoke and railway carriages screamed and squealed as they too took delivery of yet more salt. But the hot water manufactured as a by-product to this industry saw the canal a good 5-degrees warmer than it should be. A magnet to carp!

We'd seen the intended venue, which was days-only, so we then looked for somewhere to spend the night. On the opposite side to the canal, above a lock gate (a proper big 'un!) was a campsite. Here, they welcomed us three, surly British youths with open-arms. They said we were welcome to park our bivvies there for a small fee and we could play bingo. We swerved the bingo in favour of Schnitzel and chips and plenty of Dutch lager and returned to our cavalcade of huts somewhat refreshed. We sat on our carp chairs, enjoying the duty-frees we'd obtained in front of a huge, white ridge tent.

“Having watched the silhouettes with great amusement, it was suddenly apparent they were in the throes of foreplay!”

The occupants of the said-tent, a middle-aged German couple, arrived home an hour of so later, suitably refreshed and not noticing their three new neighbours they went into the tent and turned on a huge lamp. This had the effect of projecting their shadows on to the side of the tent which, in effect, gave us a huge screen to watch, animated by the silhouettes of our German couple.

Having watched the silhouettes with great amusement and stifled laughter for a while, it was suddenly apparent that our new neighbours were in the throes of foreplay! Now, as three polite and worldly-wise youths we obviously sought some decorum and returned to our shelters turning a blind-eye...

Did we hell! On our first night on foreign soil, we were treated to a shadow-play of some of the best sexual aerobics I've seen to this day. And believe me, it's a subject I've researched with some gusto. Hat's off to 'Hans', he took ages and we giggled until our sides ached. Every "Hilda, Das is gut, ya?" was met by three howling Norfolk baboons (not the reels you pillock) screaming 'Ja!" before falling-off our seats in hysterics. Hats-off to Hans though, he never stopped! 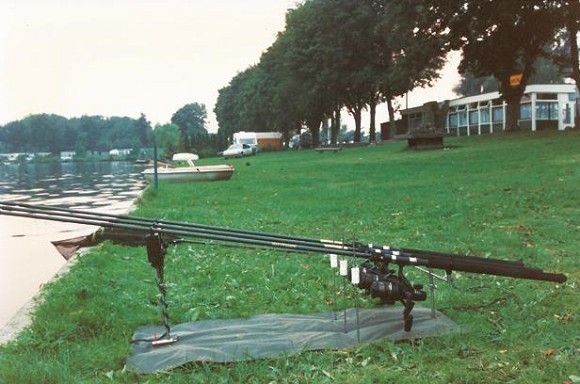 It was from this side of the canal we discovered carp heaven! We figured, that the canal could only be a few hundred yards from our pitch. On walking through the trees, the most incredible sight opened up before us. The lush, grassy banks stopped abruptly at the canal. To our left was the towering lock. I said it was a big 'un, but this thing mast have been 60ft deep and big enough to take a sea-going tanker. Every time it exchanged with the canal in front of us, it would pump millions of gallons of hot water into the stretch. So it had to be attractive to carp, eh? Plus, opposite us was a large bay, about 200yds wide and 120yds deep, flanked by caravans and holiday homes. We could also see tents, so it appeared that the place was also a campsite... Could we fish it?

The next day saw us rolling down the track to the site. There was a hundred yard stretch of mown grass beside the bay in front of the... Wait for it... Pub! On asking if it would be possible to camp and fish from the area on front of the pub, 'Of course' came the reply. Basically we'd just discovered Nirvana... Oh, and the 'overflow' students stayed there, which meant a filly or two. We were happy, well happy.

We didn't fish there on that session, deciding to log-it and fish the hot water stretch as every one else did. While the session was very productive, we thought mainly about returning to the comfort of the 'bay'. We returned as soon as we could. Myself and 'Leary John' from Lowestoft. We quickly paid our dues and set-up camp. As if the place wasn't perfect enough, there was a small BIC boat to borrow to bait-up. This we paddled fervently towards the buoys that marked the deep channel. A bit of leading around showed that the silty bay rose to a rock-hard bar before falling into the canal-proper. Carp heaven!

Within a couple of hours, we'd landed carp. Big doubles and twenties ensued, with us grappling with a glut of commons in front of the pub! The locals watched the crazy English in shorts, struggling with more carp than they'd ever seen at once on groundsheets, wet through!

The opening of the loch, in the cooler evenings and nights would see a wall of fog travel down the canal (with the hot water from the stretch above), until it would envelope you. You'd soon be wet from the mist and it would slowly clear as the temperatures reached an equilibrium again. Catching carp from the mist was a spooky affair, especially if you had to go out in the boat. I remember when I fished at the right-hand side of the lawn you occasionally lose carp on an unseen snag. I was out in the boat with a mate 'Ben' late one night. We were being pulled around by a fish I could do nothing with. Like all good stories, after 20 minutes of mayhem, the unseen leviathan made the snag and I lost it. On drowning my sorrows the next day in the pub (it felt that big!), I looked at the old photographs on the wall of the lagoon. You see, many years ago, the lagoon had been a 'lido', and the locals would all come to play in and on the water. Exactly were I'd lost the fish (and a few others), there used to be a diving board! Obviously, some of the metal structure still existed under the water. I was gutted and couldn't move so just had to pull 'em harder. I got by, but avoided that end in future!

“Basically we’d just discovered nirvana… oh, and the ‘overflow’ students stayed there, which meant a filly or two.”

On another trip, the night had become severely dank and misty when we were suddenly awoken by fearful noise, the noise of fingernails down a blackboard! "Is that you John?' I trembled. "I thought it was you ****ing around," he replied. Instantly, we both jumped out of our bivvies to realise the sound was emanating from the brolly we'd set-up as a cooking tent. On investigating the noise, we could find nothing, only for it to start again later that night. Again, our search proved fruitless.

The next night our unseen assailant returned, but on turning-over the hut we found what the noise was. A hedgehog was eating the crumbs in the toaster under the double burner! On lifting the cooker, his little beady eyes popped out, but it proved very hard to retrieve him from the cooker, spines 'n' all that. Eventually we got him out. We lit it.

Eager for our slightly singed little friend to not return, we walked a hundred yards or so and put him under the hedge. The next night, right on cue, the noise started again! Sure enough, there was our little mate cleaning the toaster for us. So on prodding him out (which we actually did the first time, before anyone starts moaning!) we took him for a 200yd walk before disposing of him in the leaves... Yup, you guessed it. The next night he was back again. So, determined to rid ourselves of this 'vermin' we took him for a drive before slinging him in the edge, having had stern word with him.

The crafty little blighter was back before us! He must have got a cab. It was definitely the same 'hog as well! So we left him to it in the end, but shut the toaster so he wouldn't wake us up.