Travels With My Carp Rods #3

A good few years ago now, I was working on the Solar stand at one of the carp shows. The previous evening's entertainment had taken their toll and we were all descending from an advanced state of refreshment and tired from the previous day's setting-up. Business, as ever, was brisk with people pulling indicators, standing on rod pods and then leaning backwards and imagining their rods nested on swathes of polished stainless.

A teenage individual, looking very much like the cub-scout from the film 'UP' forged through the masses to confront me by the pop-ups display.

"Are you Martin Locke?" he asked as he proceeded to shake and rattle every pot on display.

"No mate, I'm far better looking than him," I responded. "Looking for anything in particular?" I asked in my best, 'Are you being served' voice (John Inman!).

He dragged his nose out from a pot of the Squid & Octopus 12 millers and embellished me with the facts that he fished a syndicate water with his dad, who was over on the Shimano stand looking at the reels (I could envisage him spinning the handles as hard as he could!). Junior was in the market for an attractive pop-up that would catch on its own, or over the 'pig pellets' he liked to use. I started to alert him to the dangers of fishing a pop-up over what was essentially a bed of groundbait, but he just looked at me blankly, the freckles on his tubby little forehead merging together to form the shape of clouds drifting across his head.

"Have you seen the new Winter Secret baits?" I offered. Tests on the public so far had seen a very high percentage of instant takes, with the little pink balls being stashed fervently in carrier bags and the relative monies being exchanged in seconds. He quickly unscrewed the lid of the offered pop-ups and took a long, deep draught of the fruity wafts emanating from within. He looked up, struggling to focus through watering eyes (Amyl Acetate does that!) and asked me if we had any 'Matrix'?! I politely informed him that Solar didn't do that one, but maybe he'd like to try the Red Herring.

“I was casting at the time and I’d rather a stranger stand in my shower with me than watch me cast.”

Having eventually given him the lowdown on the delights of every pot on display, the bait's history, the additives and the options available he went back to the bloody Winter Secrets and clutched a pot of 18mm fondly to his chest, sliding a sweaty mitt into his pocket. Just as my hand prodded out over the counter for the spondoolicks, he looked me in the eye and said, "How high do they pop-up?" his forehead wrinkling in a questioning stare... He'd got me, I was floundering. "About two-inches," I said grinning at him. He threw the tub untidily back onto the shelf, thrust his money back in his jeans and informed me he needed "three-inches minimum", swiveled round and showed me a clean pair of heels!

It was like the day I was once minding my own business, fishing into the morning on a local pit when a fat bloke, swathed head-to-toe in branded carp clothing, ambled into my swim and started to eat a chocolate bar. Now, I was casting at the time and sorting out fresh baits etc., and I'd rather a stranger stand in my shower with me than watch me re-bait and cast. In fact, I think it's the height of bad manners. I looked back at the swinging end tackle and over to him and asked, "Awight?", hoping he'd take the hint.

He didn't and proceeded to ask the usual, "Fish here much?" etc. as I prepped and placed my baits. If you don't make eye contact with these people it normally sends them packing. Not him! He proceeded to inform me about every water he'd fished, how the regulars were "XXXXs" and how he was going to "ammer" another water close by. I'd actually fished that water in question a few years back and he was all-ears to hear how I got on. I told him that it was very good in the edges and if you were careful you could stalk them out on 'naturals'. "What, naturals like fishmeals?" Sigh. 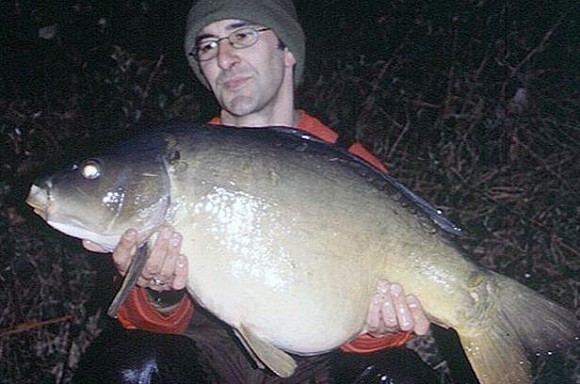 A beast in the night

On the previous subject of Winter Secret, or "The Secret' as it's now known, it reminds me of a particularly bad night I had when an old mate and I were enjoying some pretty consistent results on an albeit tricky lake with the bait, through the winter and spring. Not him! On sorting myself out I turned to the hut, yearning for a brew.

I'd turned-up on darkness during the depths of winter and quickly set-up the house and popped the baits (Winter Secret, two-inch pop-ups funnily enough) onto the spots. The night was clear and very still and you could hear a pin-drop across the lake. I was clearly on my own on the densley-wooded complex. I backed further into my brolly and looked for a bite to eat, I was Hank Marvin. There was nothing. In my rush to get to the water I'd forgotten all manner of food, and just had a flask for the night. And the lake was under lock and key; and a long way from civilisation, so 'popping-out' was out of the question.

As the minutes dragged past, I grew intensely hungry. Several further checks of the bag and car proved fruitless and to stave-off the all-encompassing hunger, I tried one of the Winter Secret boilies I was carrying. It was lovely! While I tried to resist the baits, as time dragged by I popped more and more of the little pink baits into my mouth and eventually reached a state of preoccupation! Finally, I wasn't feeling hungry anymore, and I slid-down a quick cuppa and hit the hay.

I woke up a while later with a bit of a bellyache. Laying on the bed in the freezing conditions I became aware of the distant

“I then remembered what lockie had told me: “goes through them like a Porshe,” he was right, as ever.”

sound of clanking chains and what sounded like howling! Somewhat alarmed by the noises, and with stories of murder, devil worship and mass baiting with fishmeals in the back of my mind, I got up to investigate. Blinded by my breath in the torchlight, I slowly made my way through the foliage towards the gate where the noises were emanating from. In hindsight, this was probably a very foolish thing to do, as the old track was a favourite dumping ground for fridges, masonry, rubbish and the odd body... I kid you not.

Periodically, a stomach cramp would halt me in my tracks, but as the frosty night made my sweaty brow steam I made my way, nervously, towards the howling specter. Fearful something macabre was afoot, I turned off my torch and made my way in the moonlight. As I neared the gate I could clearly hear the chains rattling and the howling was the rust old gate swinging to-and-fro on its hinges. A few yards away I could make out something large in the darkness on the gate. My mind flicked through horrific images of sacrifice and homicide, my stomach churned. Whatever was there had horns!

A second's total fear was quickly replaced by the realisation that the re-incarnation of the devil himself was in fact a full-grown stag, rubbing his arse on the gate! I stood, fascinated by the incredible animal when my stomach churned it's final churn... There was no alternative, I had to drop my clown trousers on the spot and back into the bushes. Imagine the spectacle of a squatting, gurgling angler being passed by a fully-grown stag, standing about 8ft high!

As I shuffled back to the swim, like ET (the paper was in the rucky), I remembered Lockie informing me that the baits contained a high percentage of wheat germ. "Goes through them like a Porshe," he said. He was right, as ever.