Our travelling columnist, reveals a tale of when he got it really wrong...

For whom the bells toll... Through a couple of polite letters and the offer of a 'donation' (only a little mind, which sadly the landowner was glad to donate to himself), I'd obtained permission to fish a stretch of water I'd always fancied, from a comfortable position where I could just hop out of the car and fish, close to home. The location and access was paramount. You see, the missus was pregnant with our eldest, Alf, at the time. The impending change of life ('ruining' of said-existence comes to mind) and the sorting of various 'necessaries' (since when has a 6' picture of Winnie the Pooh been 'necessary' I ask you?) had meant my time was severely limited and I had to be close-at-hand in the month's leading up to the birth, just in case. But angling's angling and I threw myself into the pre-baiting for a while until I saw fish in the area. Knowing that time was limited because of (A) 'The son of God' and (B) the fish were invariably very nomadic and would shift if I upset them, which I dearly wanted to do.

I'd stand no-chance of taking a night's fishing at short notice, so I offered to take Darth Vader's mate's son (sorry, the missus is actually called Jo, I really can't think why I refer to her as the infamous Star-Wars overlord), who'd recently taken up the noble art of angling and needed a few pointers; and me, being in the fatherly way, was the man to give 'em... Yeah, right.

'You sling that over there' I said pointing his feeder rod at 180-degrees from my perfectly located carp rods... 'and drop it on there' as I prodded a hemp-stained digit at the old bite alarm, the size of a breeze-block that I'd donated to the cause.

To cut a story short he enjoyed the night, taking several bream to around 6lbs (how big do they look when you're starting out!), learnt the 'pull my finger' trick, accepted cider and he'd seen his first carp. I'd had an 'original' mirror of around 24lbs as I recall, and there was evidence of others in the area. Once I'd got over the lack of sleep (the breeze-block's insecent squawking and the fact that kids don't sleep when night fishing) I realised that I had an opportunity here, and I'd best make the most of it. Operation 'Cross your legs luv' was born.

Through negotiation and lies I'd managed to string a few half meaningful sessions together; after-workers and evenings etc. had seen a few more fish to mid-twenties grace my net and the lack of pressure and my own time had meant the fish were still hanging around for grub. I had to try and milk it for what it was worth. So, a month before 'B-Day', I announced I was having a night's fishing. She had a face like a drawstring bag... Stuttering in the face of adversity, I offered the sacrificial lamb 'it'll be my last session before the birth'. I backed it up with other meanderings but the offering was accepted. I had one night to 'ave it before my life was to change, forever. 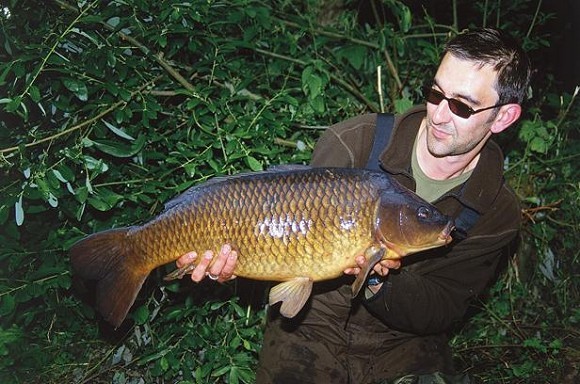 Baiting was expanded in the week leading up to my night and then cut a day or two previously. I got there 2hrs before I left work (slick huh?) and put three stringers over to the far side into the gathering gloom and drizzle. I'd just slid the brolly up when the tip slowly pulled down and a nineteen came ungraciously to the net. I'd just got the bedchair under the brolly when I had the first ever take on the rod in front of the snag (the rest had all come from beside or behind the aforementioned foliage) dragged me from my home-making. The fish gave me a bit of grief as it happens, not least kiting 50yds to my left to make it all a bit touch-and-go. I netted it to realise it was a proper-un, a mid-thirty. I slipped it into a sack and called Jay, who kindly came to do some photo's for me.

I repositioned the baits exactly where I wanted them and giggled at my good fortune at obviously being on a few fish, all seemingly original, with 12hrs fishing in front of me in perfect autumnal conditions.

Then the phone rang, the bells tolled; it was the heavily pregnant Darth.

"I've fallen down the stairs."

"I think I may have broken my ankle."

"Yes, but I'm stuck at the foot of the stairs."

"... Can you knock on the wall and get the neighbours?"

"Have you got the neighbours' number?"

"... Give it an hour and call me back," I said, still clinging-on to my night's angling.

Bearing in mind I was less than a mile away, on reflection I may have been a little mean but my freedom was ebbing away as fast as my chances. The obvious predicament meant I was going to have to return to the Death Star.

I got home to find Darth flat on her back on the sofa with her now black foot resting on the arm.

"So you're okay then?" I offered chirpily.

She started sobbing how she'd slipped at the top of the stairs and hadn't been able to stop herself. The story paled into insignificance, washed away by the sound of the drizzle on the warm wind against the windows and I stared blankly into the night, only to snap out of it when she said, "Can you help me into bed?" which I duly did with the minimum off fuss and bother. I simply threw her over my shoulder and ran her up the stairs and threw her (and my 8-month-old unborn!) on the bed. My sudden energy and enthusiasm was soon cut short.

"Where are you going?" she demanded as she realised I was starting to tease a damp legging back on.

"T.. t... to get painkillers," I offered, my eyes shifting nervously side-to-side... "You're not going fishing again?"... and that's been pretty much the case ever since!

As it happens, I did slip back the next afternoon, by leaving work early. While I only had an hour max, I punched a couple of baits over to the zone, only to get a take immediately and get 'flat-rodded' at 70yds and the hook pulled before I'd had a chance to react. And with that I hurled the sticks into the back of the motor and slid back home, defeated.

As it happens, it wasn't broken (Jo's foot, not my hook!), just badly bruised. While Jo (sorry, 'Darth') still hasn't regained full feeling in her left foot, I often wonder what would have happened that night if she'd known her place at t'foot of stairs. Poor cow, she does put up with a lot I guess.

It was my absolute pleasure to share my boat with Sir Pete Regan when he had the good fortune to land (after a couple of attempts) a truly mammoth pike. We'd landed the fish, weighed it and were then sorting the camera gear when my mobile rang. It was Darth.

"We've had an offer on the house, do you want to accept it?" An important moment in anyone's book, except mine.

"I can't talk now, Pete's just had the xth biggest (I can't remember the history now I'm afraid) pike from here..." and duly assaulted my dearly beloved with my own figures and insisted the fish had to be taken care of before I could consider the offer.

Now offers don't grow on trees and don't last long into winter's nights when there's loads of other houses on the market, but Pete's pike came first... and the offer was accepted with scant evaluation, just so I could concentrate on matters in hand. It's a question of priorities I guess.

On the subject of pike, I remember fishing a public spot on The River Yare a good while back with an old mate. He had a double and had left the lively fish for me to unhook. I'd chinned it and set upon getting the trebles out of its maw on the unhooking mat. The fish, now on its back and it was writhing somewhat just as two dog walkers happened past to see me knelt astride it.

"Don't you kill them?" asked the couple.

On that note, I'm off to get ready for a trip to the 'Bow with Lockey, which I'm clucking at the thought of. I'll tell you how I get on.