Where The Wild Things Are

To tell this story properly we will need to turn the clock back several decades, to when my father first placed a fishing rod in my hands at 4 years of age. Thus began the burning of a lifelong obsession, the flames of which may have dimmed at certain stages during the rollercoaster of life but have never fully burned out, that spark is always there. An obsession that has taken me from oceans to lakes, to rivers , streams and tiny ponds and back again, as only you fellow tragics and obsessive anglers will understand, a journey that has brought many moments of elation and satisfaction along with moments of disappointment and anguish.

On that note I do not intend to turn this article into a long winded diatribe or life story that will bore everyone senseless. This will be a story of specimen carp hunting in Australia as seen through my eyes and experiences over the years, a story that remains untold and a story that cannot be condensed into a single article. A subject close to my heart and hopefully in writing this I can shed a bit of light and paint a bit of a picture for you readers about what goes on in the land down under.

First introduction of Cyprinus Carpio in Australia dates back to 1859 when early settlers released them into Victorian rivers as a food source and an attempt to replicate the waters of their homeland. The first releases in New South Wales soon followed in 1865. In the early 1900s carp fingerlings were released into Prospect Reservoir and some Sydney rivers in an attempt to establish a population. These fish became known as the Prospect Strain and their descendants are still thriving today. Reports began to surface in the 1920s of another distinctive orange coloured strain of fish in the Murrumbidgee river basin in NSW, these fish became known as the Yanco strain and exact origins are unknown.

In the 1960s a new smaller strain of fish were imported for aquaculture and stocked into fish ponds near Boolara in Victoria, now known as the Boolara strain, major flooding in the 70s helped these fish spread into the Murray-Darling river system. Pockets of koi carp have also established themselves in certain waters either by escaping through flooding or being deliberately released. Carp have since spread out into many waterways throughout Victoria, New South Wales, South Australia and Southern Queensland, from alpine lakes and streams right through to coastal tidal rivers, with populations of koi and koi hybrids established in Western Australia also. Carp are officially classed as a Class 3 noxious species by the Australian government making their possession, sale and relocation illegal.

Angling regulations vary from state to state. NSW and the A.C.T permit catch and release. In Victoria , South Australia, Western Australia and Queensland however it is deemed illegal to return captured fish to the water.

The angling scene is very much divided in this country, most of the serious carp anglers are expats, both specimen and match guys who have continued to practice the sport in their new homeland. I would class myself as an exception to this rule, I was born and raised in Sydney and my carp obsession began on my local river bank about 5 years ago after a chance meeting with a mad Welshman who I now class as one my closest friends. 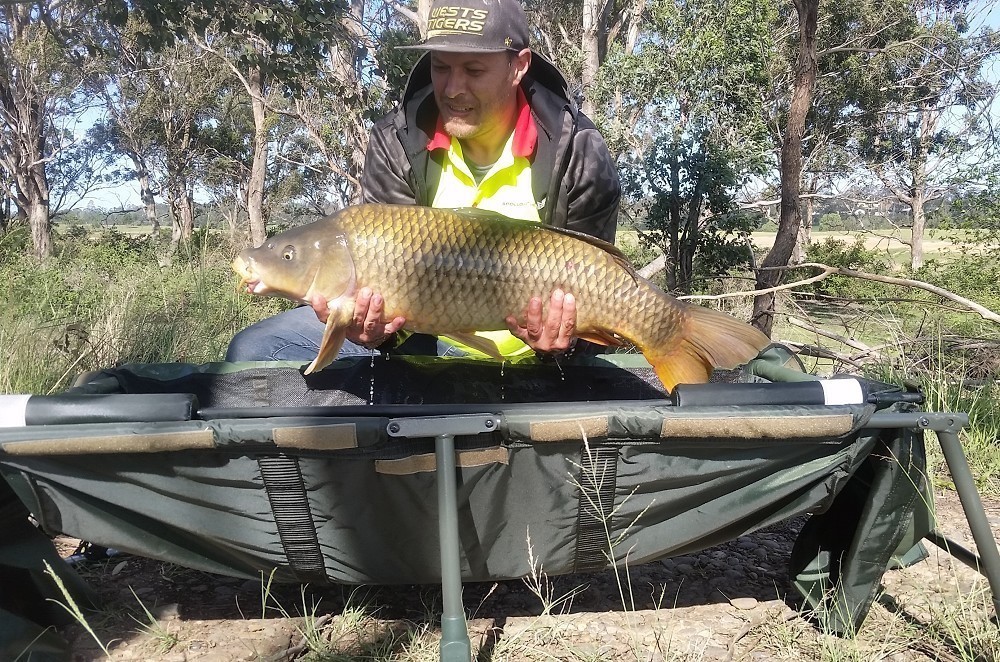 Carp have a very bad reputation here and it comes down to education and agendas. Since my early childhood we were taught they are a trash fish destroying the waterways by stirring up sediment, murking up the water, eroding the banks and eating the fry and eggs of our native fish. No conclusive evidence for this has been shown in my opinion, they simply haven't been studied over here for long enough.

People generally tend to take what they are told by either the media or various government agencies as gospel without questioning anything or doing their own research. There is no argument that they do cause problems in certain waterways, particularly on stretches of the Murray-Darling river system. What has been kept quiet however are the real reasons for the explosion in fish numbers. Flows on the rivers have been restricted everywhere by dams and weirs, billions of litres of water have been diverted right along all major rivers by irrigators and land owners for the watering of cotton plantations and other crops, population booms and growth have caused more chemicals, waste, algal blooms and pest weed to end up in our waterways. All this has helped create conditions in which the carp can thrive and made it tough on the natives. The native fish have also suffered from heavy overfishing since the time of the first settlers, before laws were changed to protect them. Murray Cod, which are a large, aggressive predatory native fish that can grow to lengths of 1.2m and hit weights of over 80lb were almost wiped out by long lining and netting. Releases of hatchery bred fingerlings into rivers and dams over recent years and strict catch laws and bag limits have seen them make a steady comeback with many reported catches of good sized cod. So carp numbers do not seem to be affecting the cod comeback. The cod have most likely adapted to feeding on the carp fry and smaller fish, it has given them another readily available food source.

For years carp have been portrayed in a very poor light, all kinds of far fetched stories have been circulated, some bordering on ridiculous. Among my favourites are that carp are wiping out platypus (a small duck billed marsupial that lives in flowing streams and rivers) by eating their babies. Also that dead fish should'nt be buried within 200 metres of the bank as the fry can still hatch, then dig or slither their way down to water. Invariably most people I would speak to on the local river banks, the majority of which are not anglers would make the same comments ie. "There are that many carp in here you can walk on them" or " You know it's illegal to release these fish?".

To which my usual replies would be "Really, then why am I not catching one every 5 minutes?" and "Actually no it's not illegal to return the fish at your own discretion in NSW if you actually check up the laws yourself". I can't really lay any blame on your average citizens they are only repeating what they have been taught for years or heard from that bloke down the pub after a couple of cold ones, rumours spread quickly. Rats of the rivers, mud marlin, and the golden bone are some of common nicknames. Love them or hate them, the one thing everyone seems to agree on is the pound for pound fighting prowess of these fish. I have caught most freshwater species from my local waters and nothing compares to that first screaming run of a wild 20lb+ river carp.

This melting pot of attitudes towards the fish has caused many arguments. Both amongst the keyboard warriors on the internet and on the bank. I have heard many stories of altercations on the bank, people being threatened with violence for releasing fish, others threatening to call fisheries or authorities to report people releasing carp in catch and release legal states. A few carp killer fishing groups also exist whose sole aim is to eradicate as many fish as possible.

Many are killed for the sake of it and not utilised. I have arrived at local waters to find dead carp dumped in the margins or strung up in trees, which can be quite distressing to see some of your target fish decimated.

KHV had been a very controversial topic over recent years in this country and has brought the fish into the limelight somewhat. Several years ago former deputy prime minister Barnaby Joyce decided it may be a good idea to release the carp herpes virus into our river systems in a bid to wipe out the fish via bio-control.

With Joyce's influence the government committed millions in funding to research the effects of the virus and the NCCP (National Carp Control Plan) was formed, headed up by a slick salesman Matt Barwick whose job it was to sell the plan to the public. So began years of debate and battling, media campaigns both mainstream and via social media and also through the parliament. The plan didn't seem to consider the long term affects or how to properly deal with the massive clean-up and blackwater events. People are frightened by the thought of their local waterways being turned into stinking cess pools of rotting fish and concerns for all the natives dying along with the carp due to blackwater events were well founded.

A movement against the virus began, headed up by passionate scientists and international experts such as Dr Jackie Lighten. They spoke in our senate and warned the government that the plan was foolish, would lead to possible disaster with recurring blackwater events yearly and not being effective in wiping out the carp in the long term anyway.

Both sides accused each other of having agendas. Joyce, Barwick and the NCCP were accused of being in the pockets of the irrigators and wealthy land owners, not caring about the health of our rivers at all. Only pushing the virus through to free up more water in the rivers so that it could be allocated to the irrigators for the watering of crops and livestock and using the carp as a scape goat rather than addressing the real issues. Many argued it was a waste and the fish should be utilised via electrofishing and netting for meat and fertilizer rather than left to rot. Thus in turn creating jobs and economic opportunities. The scientists speaking out against the virus were accused of being in the pockets of the koi industry with their own agendas.

Several years later and Barnaby Joyce was forced to resign in disgrace after an extra marital affair with a staffer,. About a year after this Matt Barwick threw in the towel as head of the NCCP and the plan started to lose steam. Due to the concerns it has now been delayed in parliament for another 12 months of research before any decisions will be made. A victory for the people and the anglers who lobbied against the release since its inception.

All of this being taken into account we have some amazing angling opportunities in this country, we are truly blessed with many beautiful waters with unknown stocks of wild fish and the sport is growing rapidly. It's one of those places were true pioneer carping is still possible and dreams can come true for those prepared to search hard enough and put the time in.

Thank you for reading and I hope this article has helped people gain more of an understanding of the Australian carp scene.