Today we have stepped into the magical lands of the Cotswold Water Park where Kev Hewitt, a prolific big carp-catcher and carp match angler, is going to reveal a gem of a tactic he’s been using to attain some amazing results in the last few years but, up until now, hasn’t revealed to the public eye. A secret weapon in the dangerous Hewitt armoury is, we now find out – solid bags of casters!

Kev explains, “My use of casters first came about from talking to my boss, Gary Davis who is a very good match angler and well-known on the match fishing circuit. He swore that casters were the best ever carp bait. At first I just shrugged it off as you do, but a year or two later in the August of 2009, I tried them for the first time. That night, the first time I tried them, I had a 38lb common from a tricky syndicate lake. The following session I tried them again and had a brace of thirties in an overnighter! I realised then how effective they were and that this wasn’t just a coincidence. I have literally used them on and off everywhere I’ve been ever since.

“Casters aren’t just a brilliant winter bait, they work all year round. I have caught on PVA bags of casters in the edge during the summer months, when fishing has been difficult and they seem to ignore most other traditional baits that they are used to seeing. It is more than likely that casters are something that most carp haven’t come across before, but once they have a feed on them it’s clear that they absolutely love ‘em! Maggots are a fantastic winter bait, but I think that casters are actually better as they have the added crunch factor. Carp love the crunch factor, which is part of the reason nuts such as tigers are so successful. As they crunch the casters all of the juices are released and as they feed, all the juice starts pouring out of their gills releasing their natural attractors into the water and making the carp go wild for them.

“Another nice edge to casters over maggots is that they don’t crawl away and bury themselves in the silt like a maggot can. The only slight disadvantage is that all fish love them, especially bream, tench and big roach. If there are large numbers of nuisance species in the lake, chances are that unfortunately the casters will be snaffled up before Mr. Carp gets a sniff, concludes Kev.”

Casters vary in colour depending on how old they are but the mixture of shades of a caster, particularly the lighter ones stand out a mile off and this makes them very visual, so they are an easy target for carp to detect. You must, however, remember that though they don’t actually move, they are a living organism and they are not dead. Casters are simply part of the life cycle in between a maggot turning into a fly. The problem being that a caster is a chrysalis that wants to turn to a fly and all we can do is slow that process down to ensure the casters stay fresh. This means they require a little attention when keeping them. If you expose them to too much air they will go dark and float but if you give them no air at all they will die. You have to remember they are a living life form and need to breathe. If they get too warm it speeds up the process so you need to keep them cool and in airtight bags but they must be taken out of the bags and re-bagged every couple of days so they can breathe.

When at home they need to be kept in the fridge and when on the bank, a cool bag with an ice pack should keep them fresh for up to four or five days. Casters sound like hard work, but as long as you follow these guidelines it is quite simple really. Kev guesses that it is a lot of effort to some anglers, which suits him, as the fewer people using them, the more he will have a massive edge over others! 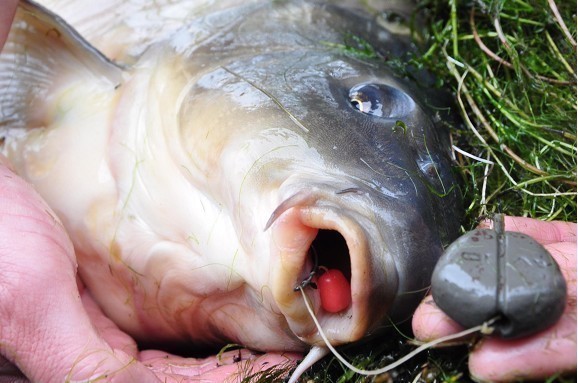 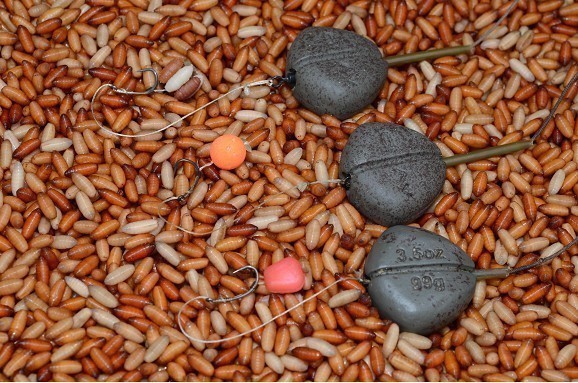 Where to fish caster bags

“When fishing weedy waters, I pay a lot of attention to detail when finding the right spot to fish a bag of casters. Careful plumbing with braid to find the clear spots is what I am looking for. I am not a massive fan of fishing PVA bags in weed and will always opt for the clearest, hardest spots I can find, which I see as dinner plates on which the carp like to come and feed. On the busier waters it is often the case that the clear spots are only clear because they are fed on regularly, so a PVA bag of casters on a dinner plate is a recipe for success.

“On waters where there is very little weed or features, it is just simply a case of casting them to showing fish and into the vicinity of where the fish are. I often fish all three rods very tight together on one spot. I don’t like to spread the rods out across the swim and I normally choose what I think will be the best spot and get them tight together. This means that I have not one, but three chances of a pick-up off that spot. There is the chance that one rig might get turned over and a carp could get away without being hooked, but I think the chances of that happening three times in a row is highly unlikely.

“They were told three fish would attain a qualifying spot... Using casters the pair managed 15 bites!”

“I’m quite happy fishing the bags of casters on their own, especially the larger bags if I can cast them to the chosen clear spot. Although they are so visual I will also in some instances use this technique when fishing over a bed of bait. I feel that the visual aspect of a bag of casters can really draw fish in and get their attention to the bag and the hookbait, meaning the chance of getting a bite quicker is increased,” wraps up Kev.

When using the bigger bags in deeper water, anything over six-foot, Kev recommends double bagging them to make sure they get to the bottom. “If I am fishing them over a spodded area at ranges of 60yds plus, I use smaller bags but with the casters I try to use as big a bag as I can get away with. The ESP Bulk PVA bags are my favourite for anything up to 60yds and are big enough to offer a good-sized meal for a carp. Coupled with a 3.5oz in-line lead, it is advisable to use a shockleader when using anything less than 15lb main line.” 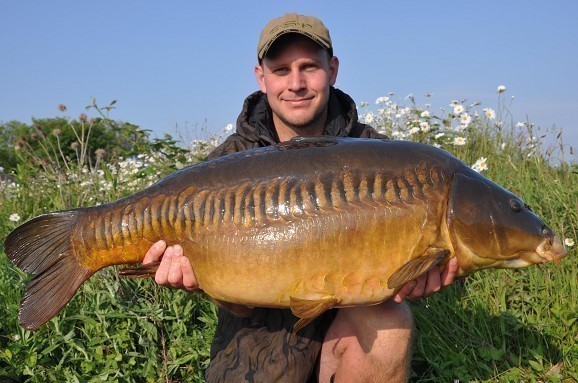 "As for hookbaits to fish in conjunction with casters in a PVA bag, I am more than happy to use a small balanced pop-up, single grain of plastic corn or even plastic casters glued to a piece of rig foam to make a balanced bait,” he reveals. “Although all these hookbaits are very different, they all work because they have one thing in common: they are all fished as a critically-balanced bait. Casters are light and slow sinking so it would be wrong to fish a heavy bottom bait over the top as this would need more pressure to suck in than the casters around it so it’s less likely to be picked up. So it is essential to get your hookbait to match. Something small and balanced is what is needed. The fake caster hookbait on some rig foam works perfectly but more often than not, I don’t tend to use it. If I catch a fish or reel in a caster hookbait, it becomes obvious to those fishing around me exactly what I’m doing... it’s nice to keep a few things under the cap at times and as I seem to catch equally as well on bright pop-ups over the top, using them means no-one is any the wiser!”

Kev Hewitt and his partner Mark Bartlett fished in a qualifier at Baden Hall this year for the British Carp Angling Championships. Neither had fished the venue before and were told three fish would attain a qualifying spot. This bit of advice turned out to be true… but using solid bags of casters on their own the pair managed 15 bites for 10 fish including a thirty, getting them first place with 220lb! This just proves what a devastating tactic this can be, so get on the bags of casters this autumn/winter! 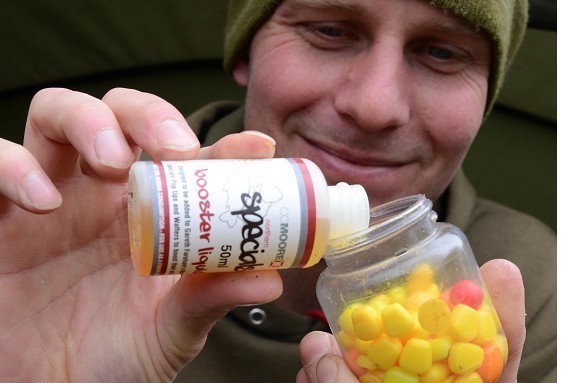 Whereas most people fish slack or semi-slack lines, Kev often fishes ultra tight lines. “I like to fish pretty tight. As I said, I often fish three rods very tight together on one small spot and in having the lines tight I can tell which one has landed where. It also gives me much better bite indication than slack-lining. It’s very rare I get a liner; if it does bleep then I know something’s moved the lead!”