Is the big fish moon a myth or reality?

If you’re trying to catch big carp by design the moon is the most important factor of all and still people don’t pay attention to it. For ten years I’ve monitored moon phases and their effect on carp captures and I’m in no doubt that understanding the effect of the moon on the carp you are trying to catch is the greatest edge of all. Most people write the moon phase and its relationship to carp captures off as coincidence, and that includes some very high profile anglers. I don’t believe in coincidence. The bottom line is that people just don’t understand it. I target one individual big fish at a time, and by studying the moon I know I can massively swing the odds in my favour by fishing at times that the carp is predisposed to getting caught.

I’m into profiling big fish, and by doing that you end up being forced to accept the significance of the moon. Long before mobiles and moon phase apps I started marking on a calendar every time a big local fish got caught and very quickly started seeing clusters twice every month. I noticed a lot of captures would be a couple of days either side of a new moon or a full moon, so immediately I saw two four-day prime time windows. It was a starting point to investigate further.

Since then, as soon as I decide to target a particular fish I check the phases of the moon relative to past captures and 99 per cent of the time there’s a pattern. I can fish a lot if I choose to but my edge is maximising my chances by only fishing on the key moon phases, which is usually four-days twice each month. I’ll fish eight days - the equivalent of fishing each weekend but the difference is I only fish at the times when my chances are best of the carp I’m after. That is my edge, it’s an edge that has been written about before but isn’t widely discussed because big fish anglers don’t want to let other people in on one of their greatest advantages.

The bottom line is does it work or not, or is it just theory? My results and those of my friends make a very strong case that moon phase is a major part in catching those big target fish. Even for a social trip it will be arranged around a key moon period. We went to the Pads Lake at Yateley a couple of winters back and all caught big fish despite sub-zero temperatures. If the moon phase is right they are catchable no matter what the conditions are. Let’s give you some examples to get you thinking…

The common objection is that carp get caught at all sorts of different times, and therefore you can’t predict what will happen using the moon phases. There are always going to be captures outside of the peak times, but there are reasons for that.

On well stocked fisheries for example the behaviour of the carp will always be a lot less natural than the sort of big low stock venues I tend to be targeting. And also a good angler in the right place can induce a bite, either out the edge, or off the surface for example.

What I have learned is that aside from chances of catching big fish that you can sometimes make there are times when they are ALWAYS going to get caught - and I aim to be there at those times, that’s my edge. It’s also not as time-consuming as you would think. Thanks to mobiles, and the internet and on-line forums you can often profile a target fish in a matter of minutes, and know when your best chances are of catching it. 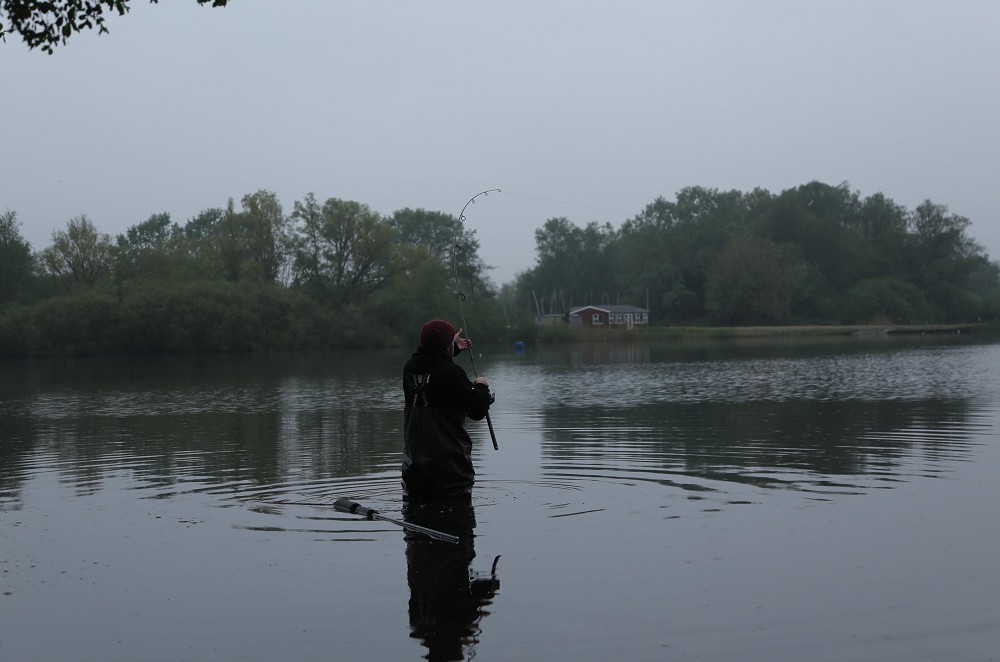 Exactly why these key periods in the moon’s cycle result in carp being caught is the impossible question to answer. I don’t know the reasons why, but I do know the phenomenon exists. There are all sorts of possible elements to it. The moon’s effect on gravity and weight, and exerting a pull that dictates the tides of the world’s oceans gives you a stark reminder we are dealing with a powerful force of nature, arguably the most powerful of all.

There’s not so much fact but a huge amount of circumstantial and anecdotal evidence when it comes to the moon and behaviour. You read about links between increased criminal activity and the full moon, even increased naughtiness in children around the full moon. A friend of mine works in a psychiatric ward and he will tell you there is a marked change in behaviour around the full moon. The word lunatic is derived from lunar - concerning the moon. Poachers used to live by the moon, full moon was often referred to as the crazy moon or fighting moon. Even the female menstrual cycle is strongly linked to the moon - all these things are not coincidental.

I almost always find the clusters of big fish captures are centred around the new moon and full moon. Generally I prefer the full moon but have also had a number of big fish on the new moon.

Most of the major periods revolve around the moon and its alignment with the earth at any given time. Minor feeding periods are more typically related to the sun transition rather than the moon.

Then there’s the first quarter and last quarter which can also be productive - Christchurch at Linch Hill fishes its head off on the last quarter of the moon. Differences like this I sometimes suspect might be to do with the differences in natural food available and how the changes in moon phase affects feeding opportunities.

It would make sense - for example oysters and clams are harvested on the full moon, so if the moon can make shellfish easier to harvest, might it not have the same effect on some of a big carp’s natural feeding behaviour for the same reasons? One thing that is very much overlooked is the relationship between moon phases and trends in the weather. Often the new moon will bring low pressure systems and strong winds from the south or the west. Ask any outdoor photographer what time of the month they are likely to get blue skies and settled sunny days (generally high pressure) and they will point you to the days around the full moon. In the winter I base my fishing around well stocked venues but still use the moon phases to give me the best chances. Watch the weather patterns closely and you will always find the big weather systems fall in place around the new moon. I have managed to catch some good 40lb fish in the winter using my theory on the moon phases and feeding periods associated with them. 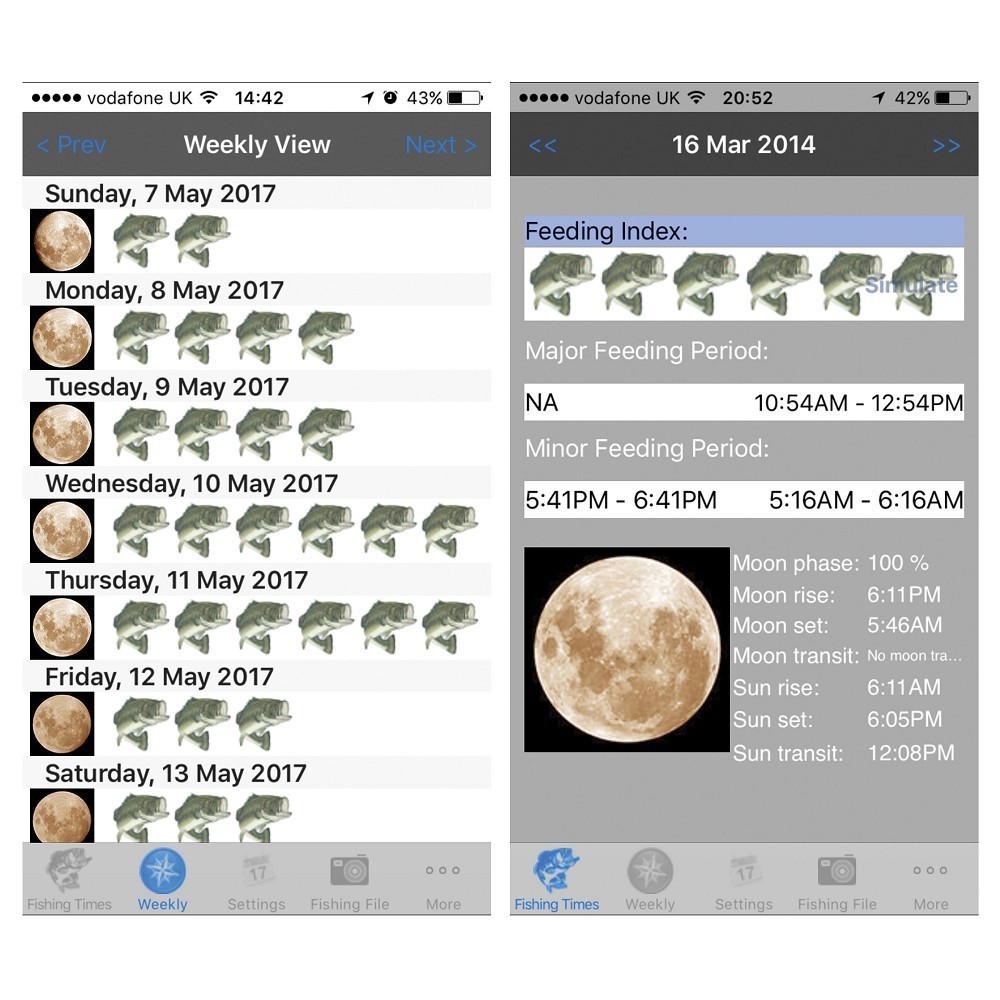 Tap for the app

The days of plotting captures on a calendar are long gone and if I’ve sparked your interest in the moon and how it can help you increase your chances of a big fish get yourself on the Play Store and download the American app Best Fishing. Each day gets a rating along with major and minor feeding period times based on the relationship between what the sun and moon are doping at that time. Even better, it allows you to back date historic captures to see the peak times that related to fish you have caught in the past. 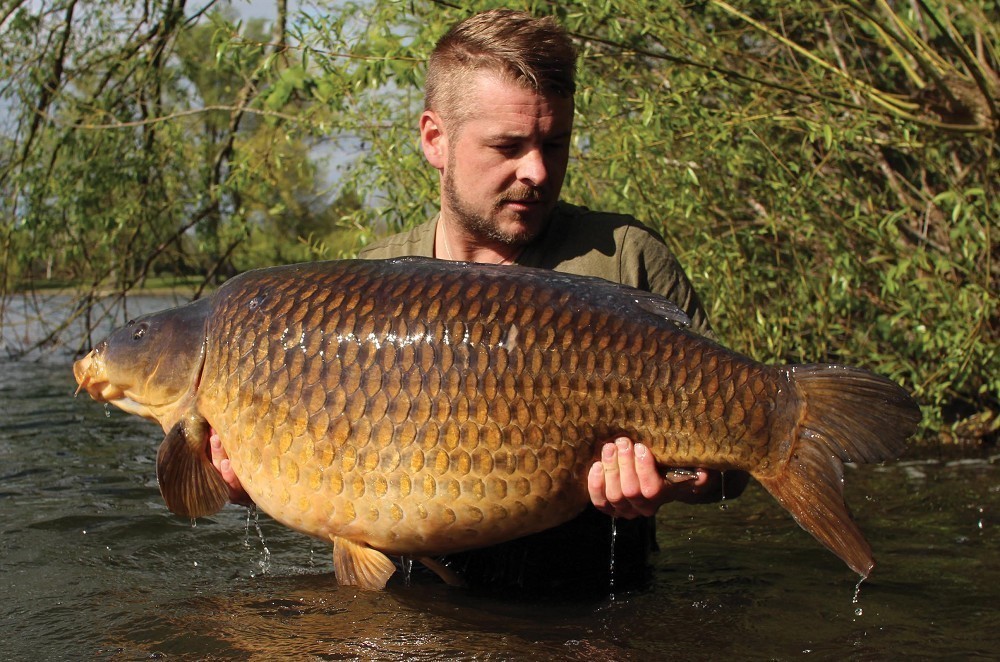 Who wasn’t drooling over Scott Lloyd’s capture of the great fish at 62lb 8oz last April? He caught it on the 12th, one day after the full moon. There’s a lot of talk about full moons and commons, although I think that’s a bit of a myth as I have caught a lot of big mirrors on the full moon as well.

There is a lot to be said about The Burghfield Common, it loves a midday capture on a full moon phase. Look at Nigel Sharp’s capture back in 2006, the 13th of May at 11:55am, bang on the full moon and if you look closely also the sun transition period.

When Scott caught The Common many years later on the 12th of April, one night after the full moon again, look at the sun transition, that fish seems to get caught so close to the sun transition period it can’t be just coincidence surely.

I was lucky enough to be part of the capture and was blown away by that fish. I was there of course, because I’m always there when I know the chances are best of the target fish coming out.

There was another big common caught from Kevin Nash’s own Church Lake the day before, exactly on the full moon. Spenny caught the big common at over 50lb, which had evaded capture for two years. 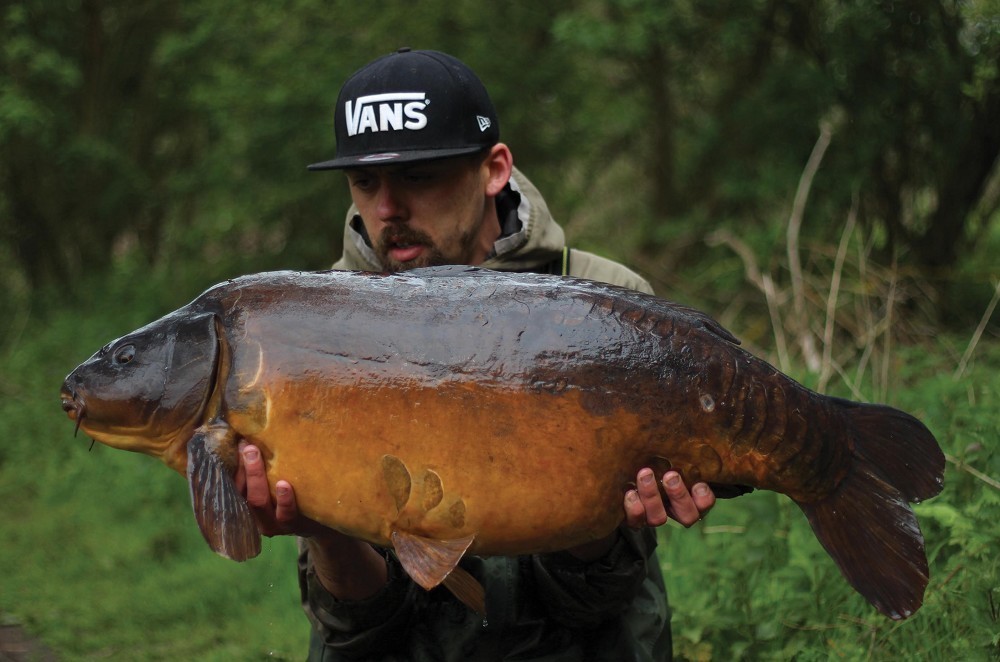 An upper-forty from another Berkshire pit this fish was caught within 25 minutes of the peak time last spring. The year before the wind was a northerly and it was caught at the opposite end of the pit, but this time within 16 minutes of the prime time. Coincidence? In April 2016 full moon was on the 22nd and on the ultra low stock pit where The Baby Black lives there were 17 takes in the five days around the full moon - there are only 35-40 carp in the entire pit. 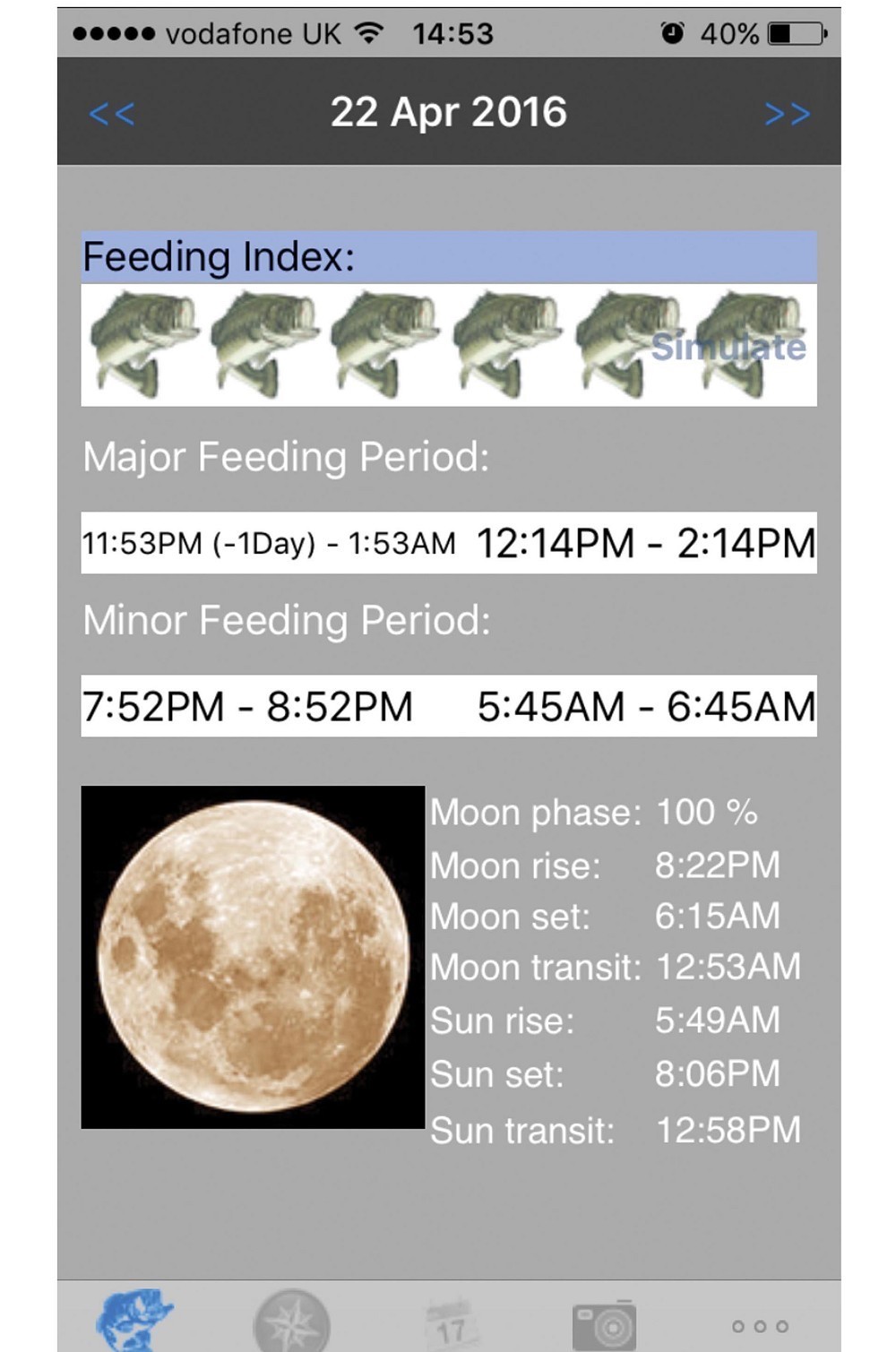 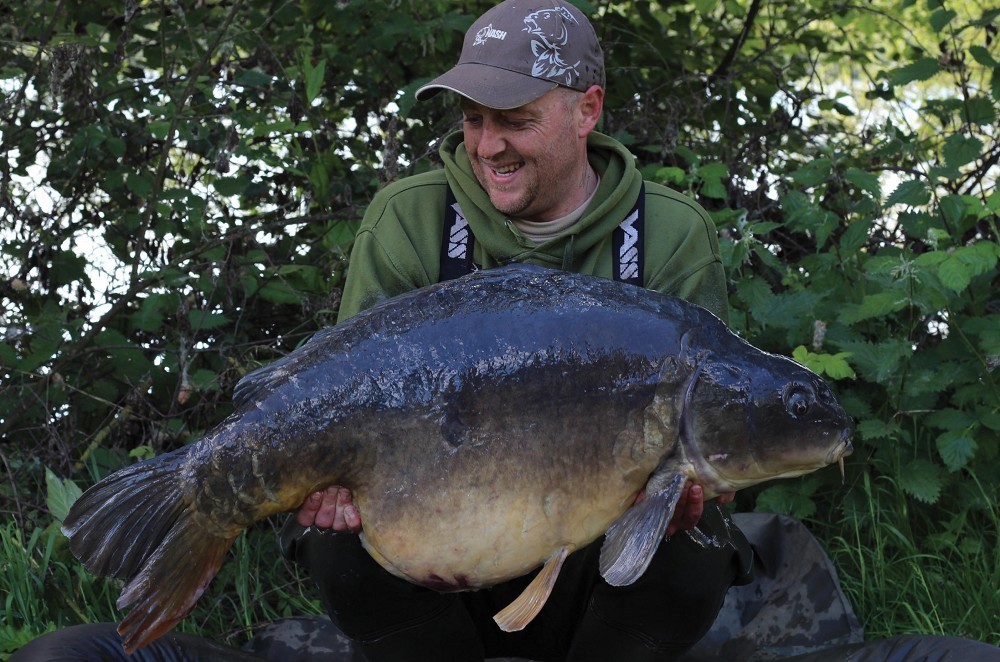 In July 2015 The Brute from a pit over the road was out on the full moon and within 24hrs 11 fish were caught. The same fish was caught three days before the full moon in September 2015. I caught it in 2016 bang-on the full moon. The Brute is the most clear cut example I’ve seen over the last few years and you can guarantee what moon phase it will come out on - there’s your window, go and catch it. Three of my friends and myself have done exactly that, and been in and out and done the job within a month. 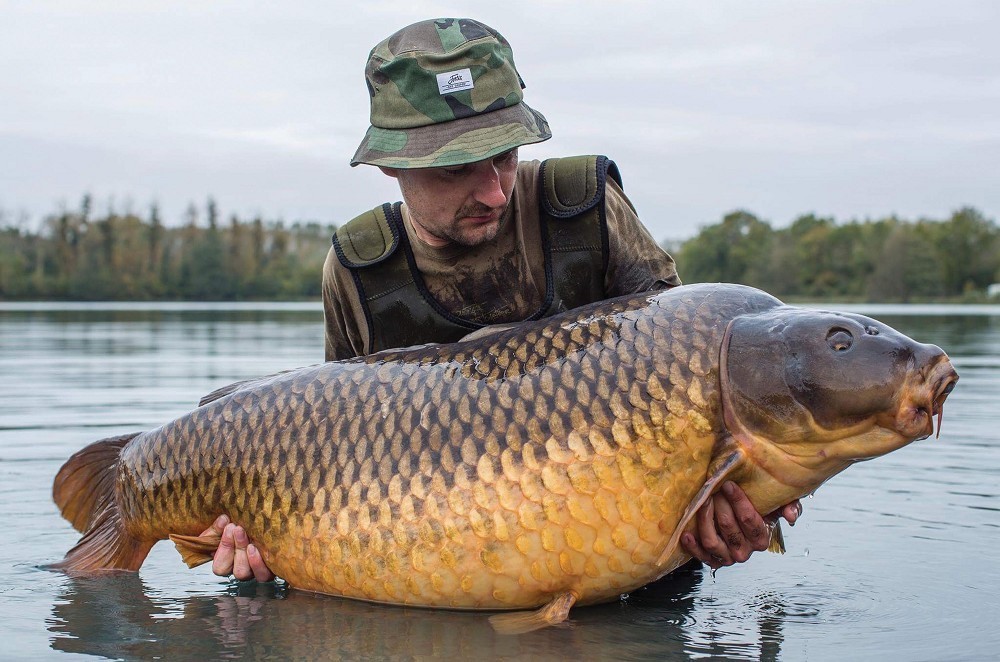 Oli Davies’ capture of the Teillatt’s Common at over 80lb during the 2014 Nash social was also right in the middle of a peak period on the day of the full moon. 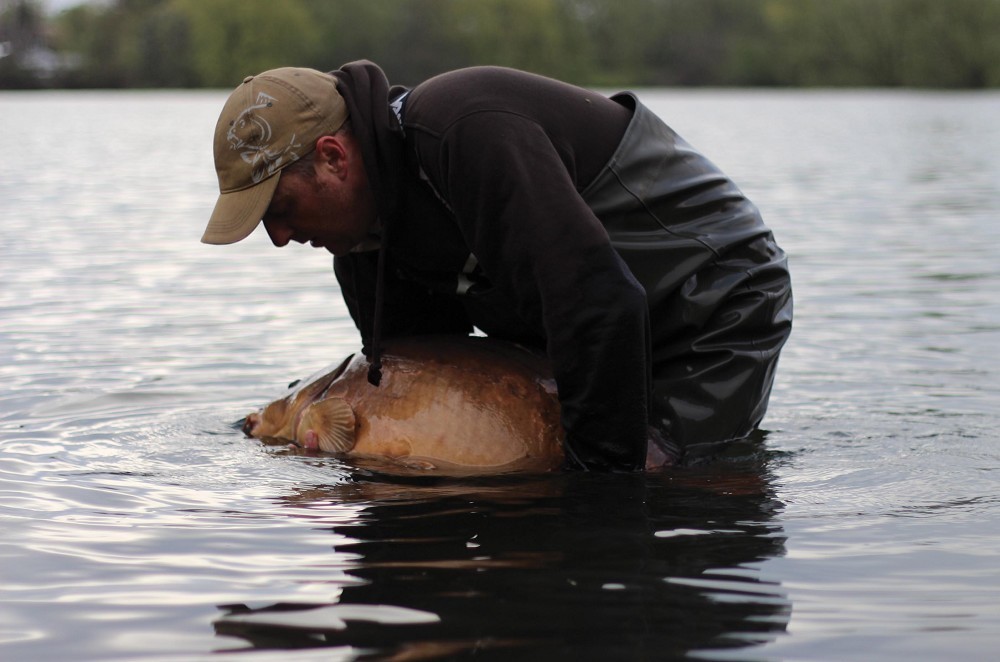 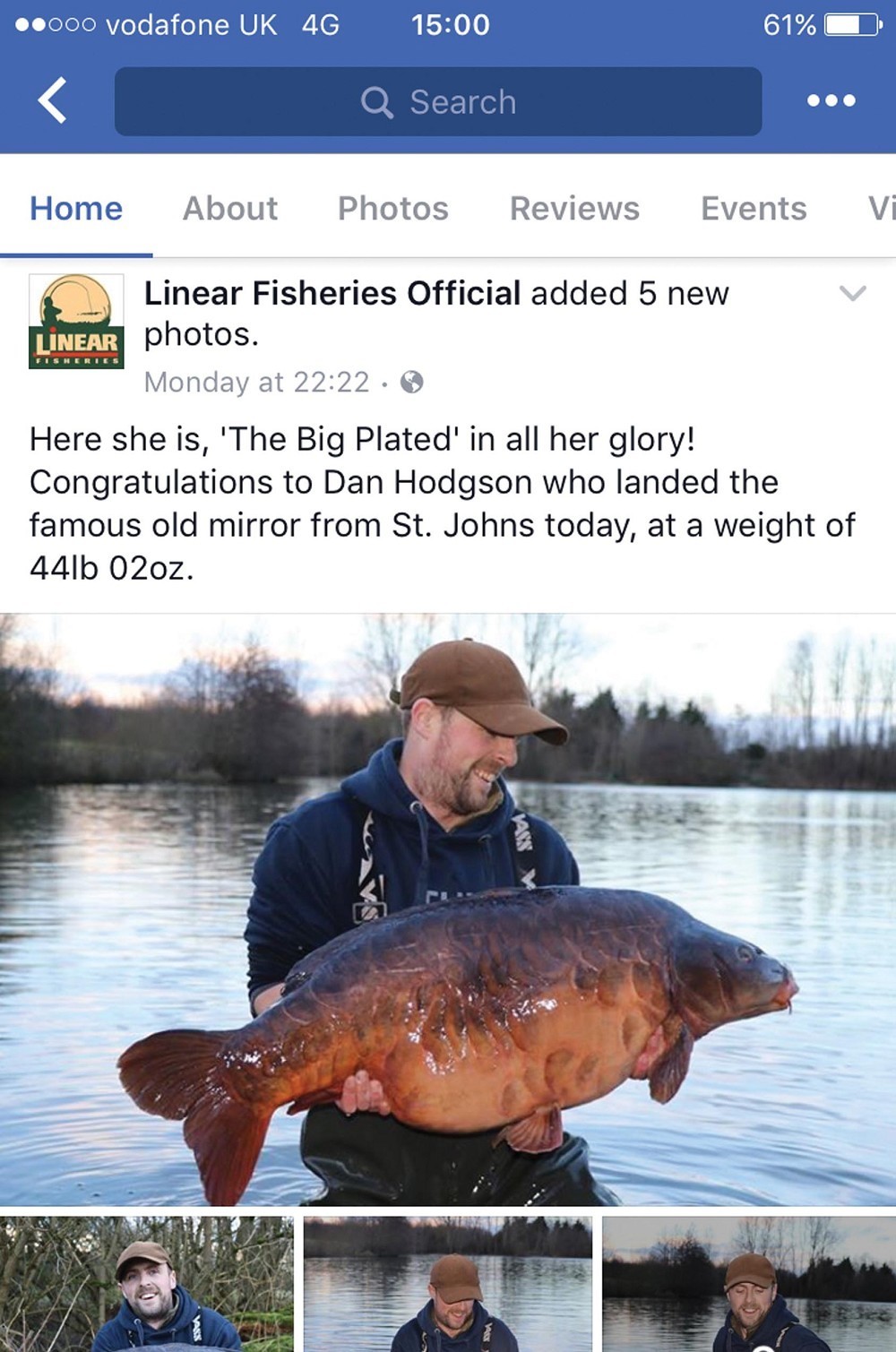 One of Linear’s most sought after carp the Big Plated was caught on February 27th 2017, one day before the full moon. 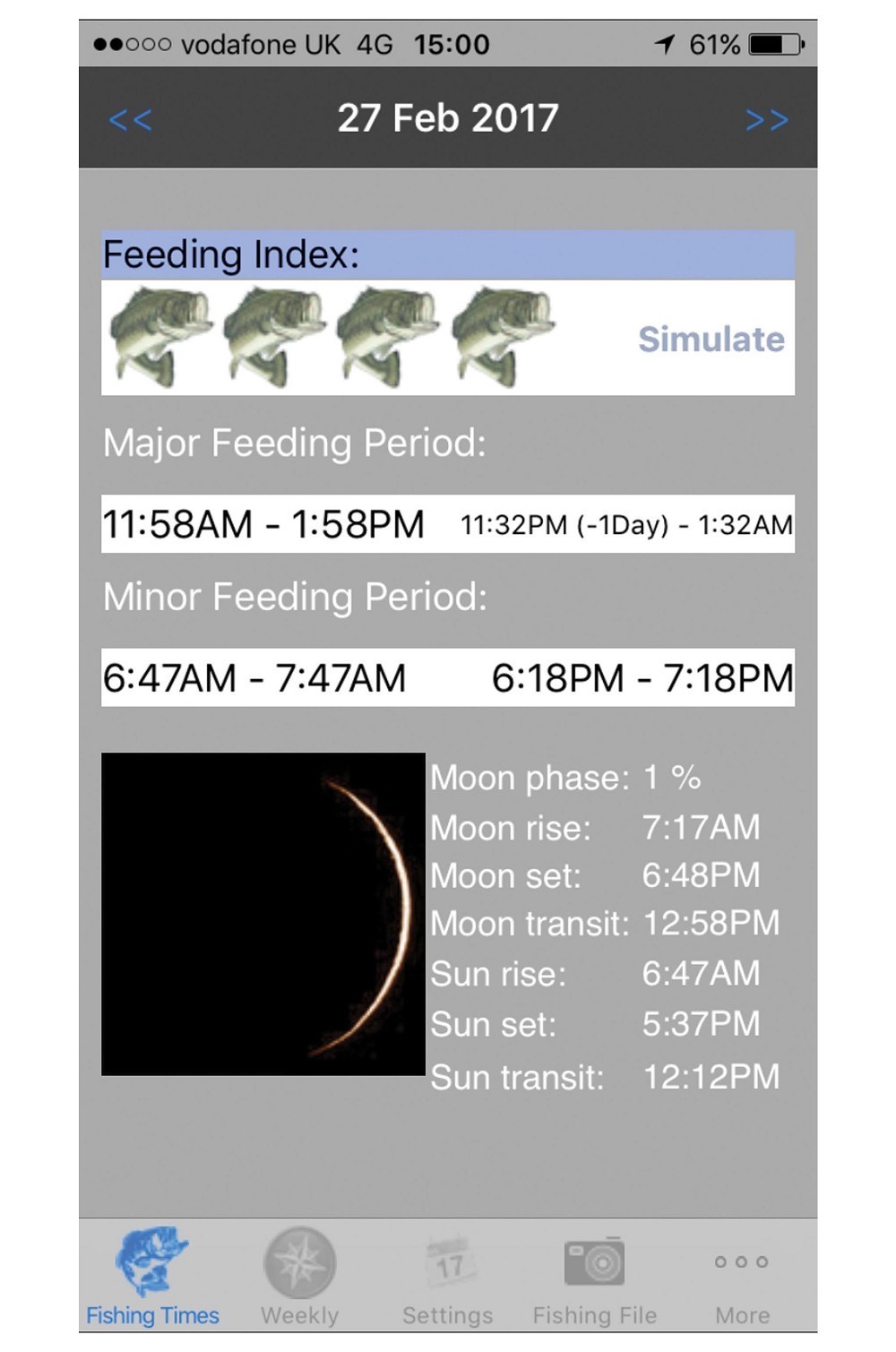