Having caught literally thousands of carp over the last twenty-five years, we contact carp legend Julian Cundiff for his advice on how not to lose the carp you’ve worked so hard to hook

“The first and most important point is not just to accept ‘regular’ losses as ‘just one of those things’. Luck always plays a part in all aspects of carp fishing but if you follow the next nine pieces of advice and the last reminder, there will not be any regular losses and any that do happen can be cured and prevented in future.”

“Do not simply cast out and hope that you will be able to land the carp you hook. Think about where you are going to cast and when the carp takes and runs in ‘any’ direction how can you control it. If it kites left, right, runs towards you, do you know what you are going to do? If not, then don’t put them out till you do know.”

“Have these with you at all times so whether you fish one, two or three rods you can have a net to the left and right of the swim. Trying to lift nets over your rods or even worse trying to bully/persuade carp to swim to the side your nets are is a recipe for disaster. This alone will stop you dropping a lot close in.”

04) Know the tools of your trade

“If you are using fluorocarbon, know how it behaves compared to monofilament. How much stick can you can give a carp on a size 10 compared to a size 6? Different items behave in different ways and your playing of the fish will have to be adapted to match the hook, lead set-up, main line choice, rod choice and so on.”

“When the lead is ditched, the rig is less likely to snag on weed and such like and you tend to have a more direct line of contact with the carp. Also, when the lead is dumped, the carp usually come higher up in the water and the higher they are the less likely they are to find safety. Most anglers I see don’t drop the lead and lose more fish because of it.”

“Like a dog on a lead. The rod you use should be an extension of your arm and not a ‘tug-of-war’ between carp and angler. Whatever rod you use, it should guide the fish in. There is no need to ‘bend into the fish’ unless it is going into snags and you have to stop it. Use it as a lever and not a longbow (no pun intended DF) and you will lose a lot less. 3lb test curve rods don’t pull hooks out at close-range, daft anglers do who don’t learn the ‘lever lesson’."

“There isn’t a time limit on landing the carp so don’t rush it. Yes, you can never be sure you are going to land it till it’s in the net, but it will be ready when it’s ready and not before. With experience you will know when it’s ready for netting but as a rule of thumb, when its head comes up it’s about ready. Extend that net and draw the carp in but don’t chase it with a rushed netting. Sometimes carp take a minute to land and sometimes ten minutes… don’t rush it or you will regret it.”

“Standing up in the swim and even worse, having a crowd of onlookers stood up watching and commenting on the action is not the best way to net the fish. The higher up you are, the more likely you are to spook the fish and a spooked fish is an unpredictable fish. Unpredictable fish do strange things and that’s when hooks ‘pop out’. Whoops! I always keep low and I politely but firmly keep people out of the swim, certainly net the fish myself if I can and tell them, ‘No, I don’t want to know how big you think it is…”

“The smooth approach is the best approach. If you are smooth, the fish is more likely to be predictable and less likely to jag and weave as you are playing it. When a carp bangs from side-to-side, changes direction and panics, that’s when the hook will pull. Whether you are moving the rod, reaching for the net, adjusting the clutch, pushing the net out etc., do it smoothly.”

“The best way to learn how NOT to lose fish is to catch and land plenty. Whether they are ten, fifteen or twenty-pound, the more you catch, the better you will become at landing them. A carp is a carp is a carp and often a spirited ten-pounder is harder to control than a pulsing thirty-pounder. You should be able to almost do it with your eyes closed and when you’ve caught enough you almost can. If you’ve caught plenty, sometimes when you net them you will hardly remember playing the fish as its second nature (like driving a car).”

“And finally, sometimes they do ‘just drop off’. The hook could catch bone, the flesh maybe soft and tear and the hook hold may be poor and off it drops – that’s carp fishing and within reason you can’t legislate against everything. Follow the advice I have given here and you will lose a lot less… the photo’s will prove it…” 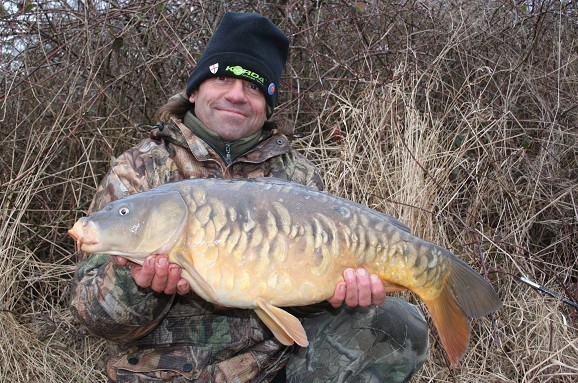 HOW TO UNHOOK A CARP CORRECTLY

Is This The Biggest Hit Of Winter Carp In Europe Ever?