To mark 200 issues of CARPology, we're returning to the original articles, such as this one from Simon Scott

Footnote: This article was originally featured in issue 26 of CARPology (May 2006), and is being rerun as part of our 200 issues celebrations.

We arrived on a wet, overcast morning at Waveney Valley lakes in Norfolk. The reason? To watch 25 young lads and their two lecturers, Simon Scott and Shaun Leonard – two of the best in the game – pull a net through two lakes. The excitement? To see what they pulled in. The result? A shed load of carp! After the second day of netting, we made a deal: free pints of ale in return for some invaluable information. Here’s what they told us…

CARPOLOGY: How did you get into fishery management?
SHAUN: “I’m an angler, who wanted to be Jacques Cousteau and this is what I ended up doing. I did Marine Biology, then an M.SC in pollution, and from there I went to working at Sparsholt.”
SIMON: “From the age of seven, I’ve been passionate about fish and it seemed the logical step to go onto Sparsholt after school and do a course there and then an M.SC. Basically I’ve wanted to work with fish all my life.”

So what’s the purpose of netting the lakes at Waveney? Stock check? Moving fish into other lakes on the complex? Removing the silver fish?
SIMON: “There were a number of purposes for the operations we did at Waveney this week. The primary objective was to remove the bream from C Lake, but at the same time to also get a rough idea of how many and what condition the carp were in. Today’s job was to remove some of the carp from F Lake, some of the young Mark Symonds fish, into C and D/E Lakes and a few into Heartsmere.”

How often do you do these types of netting?
SHAUN: “Three days a week maybe, and that’s all across the country. We’ve been as far as France, plus we’ve done a few nettings in Wales and Devon.”
SIMON: “In a big week, we’re maybe out four days, so it’s a fair amount of work.”

So you’ve arrived at the lake in question, what’s the first thing you do and how does it run thereafter?
SIMON: “Obviously your watercraft as an angler comes into play. You’re trying to think where the fish might be. You’re looking where you might be able to get your net in, because. as you will have seen yourself, you need a fair amount of space to get 120-metres of net to the bank.”
SHAUN: “I like to echo sound a lot. I use that loads, just to get a picture of what’s down there, where you think you’re putting the nets and where it will end up.”
SIMON: “We also listen to the locals a lot. If there’s a plateau out there, which rises to 3ft, we need to know about it quite early on before we try and pull it in.”

Tell us about those suits you wear?
SIMON: “The dry suits? They’re superb. They are surface-dry suits and not designed for diving, but they enable us to work basically anywhere on the lake. The depths aren’t an issue, so you can go out of your depth and they just hold you up off the bottom; you’re a floating bubble! You can be a lot more mobile around the lake, meaning you can get the net off the snags and you can work along the deeper margins a lot earlier too.”
SHAUN: “And fish the students out from the deep!”
SIMON: “They do have health and safety issues too. If a lad should slip off the marginal shelf, we can go in and get them out.” 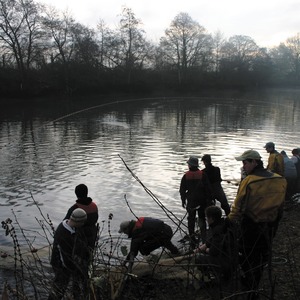 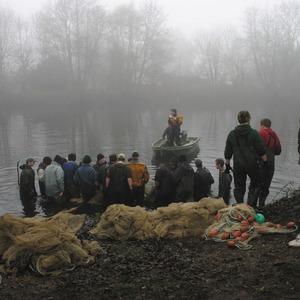 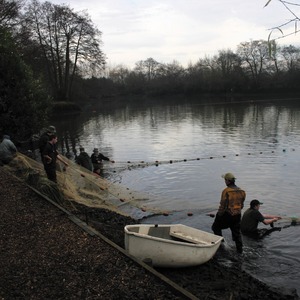 Have you had that happen much?
SIMON: “Yes, loads of times!”
SHAUN: “Most days!”
SIMON: “One good ‘un was when Shaun and I were netting a lake, no, a river, a section of very slow moving river. We were all on the edge of the river and we brought the net in, and Shaun said to this lad, whose name was Dan, “Dan, just step in here gently and give us a hand with this.” Well, Dan stepped straight off into coloured water; you couldn’t see the bottom. He completely disappeared! There was a big splash and a few bubbles and we all looked at this spot. For a few seconds everyone’s jaw dropped, and then a few seconds later he popped back up. This was in February!”

What are the biggest problems when netting a lake?
SIMON: “A huge amount of things. Silt can be a nightmare. The silt here at Waveney hasn’t been a problem, the nets have fished beautifully, however, on other lakes silt can collect in the back of the net, almost like an ice cream scoop and you end up with tons and tons of it. Fallen trees can be a problem; Shaun has in fact tried to net a mini-bus and a JCB! So yeah, underwater features can cause us all sorts of problems. Often and interestingly, fisheries are made for anglers, not for netting, so swims are very tight and can be a complete nightmare.”

What is the ideal time of year and conditions for netting a lake?
SIMON: “Ideally the winter months because the oxygen level in the water is much higher, and also any weed growth has tended to die back. The fish are also more torpid, which means, for example, handling bream in the summer months can be very tricky as they can die very quickly. Their oxygen requirements are very high and they suffer from stress really badly.”
SHAUN: “We would have lost all of those fish yesterday if we had done it in April/May time.”
SIMON: “It would have been a net full of 10,000 dead fish! The cooler the water, the more oxygen it holds, plus the fishes’ metabolism slows down, which makes them a little more sleepy and easy to handle.”

Have there been any surprises when you’ve netted a water?
SIMON: “At the Match Lake on the Yateley complex we netted a 41lb catfish and a 39lb catfish in the same sweep, which obviously got everyone’s eyes bulging! We’ve netted over 1,500lbs of bream in one sweep on a bream removal and having done four sweeps and not caught anything apart from the odd carp, and then to catch this huge ball of bream was quite something!”
SHAUN: “We had 11-tonnes in one haul in France! That was made up of carp and zander.”
SIMON: “That was the biggest single sweep we’ve ever pulled. There was a point when the net came in and where we got in really close with the nets at 10-metres long and 5-metres wide today; this net was still 25-metres into the lake and it was 35-metres long! All you could see was carp; could actually have jumped up and run across their backs.”
SHAUN: “It took us four hours to get the fish out of the net.”
SIMON: “The worst four hours of my life!” (Laughing)

Have there been any surprises, with regard to unknown monster fish getting caught?
SIMON: “Not so much monsters, but you regularly get fish turn up and people don’t recognise them, even on C Lake here, people were saying they’ve never seen those fish before, and even mirrors that look like they’ve been caught a few times, people didn’t recognise them. I think in any lake there’s a group of hardcore fish that get caught, caught, caught, caught and caught and there’s a very big percentage of fish that either never get caught or are caught just once a year.”

What’s the biggest carp you’ve ever netted?
SIMON: “Low forties. We had one sweep at Sutton and I think we had one low-forty and a couple of high-thirties: a 39lb common and a 38lb fully scaled. That was the most exciting haul I think we’ve ever had.”

What are the weirdest things you’ve ever found?
SHAUN: “Well, I never brought it in, but the JCB, definitely!”
SIMON: “I think we’ve had a few small, sunken boats, but there’s one story I heard from a friend who works at the college and they netted a bear that had been skinned and he dragged it in and they thought it was a body to start with! They called the local police, but as it turned out, it was a bear that had been skinned and chucked into a north London gravel pit. I think it turned a few stomachs as it floated to the surface.”

At Home With Albert Romp

From The Back Of The Van