CARPology investigates how Tel became the best in a large picture and huge caption format. #CARPologyAt200

Footnote: This article was originally featured in issue 19 of CARPology (September 2006), and is being rerun as part of our 200 Issues celebrations.

"This is one of my first ever carp. I remember it was on a little piece of luncheon meat and I was on holiday in Dorset. The same week I caught a 6lber! I haven’t got a picture of that one but, that was in fact my first ever one. I was 12 at the time."

"This was from the same place. I was so chuffed that the carp bug had got me, the following year I went back there with a mate. He’d made his parents take us there on holiday! I caught this one on a floater and it weighed about five-and-a-half pounds. I was using a size four Mustad hook with two big cat biscuits hooked on to it! Back then we used to do a lot of fishing for everything on the rivers, mainly the Thames. We couldn’t drive obviously as we were too young – I was only 13 – so we used to go on the bus."

"This was taken in 1992 in the old Match Lake car park as it used to be. I remember that mud like it was yesterday. We didn’t have carp porters then either! The white car on the left was my first motor – an Escort Estate. The one of the right, covered in trees is Pinkies brand new company car! I bet if you done that to him nowadays, he’d kill ya!"

"This is me when I was 13-years-old. I was more into my all round fishing then, and here I am with a fine net of bream from Kingston-Upon-Thames."

"This is one I caught after school, which was from a lake called Winnyhill. It was a local lake and I went there on my pushbike and that was the first carp I ever caught with buzzers. They were the original Optonics; the ones you couldn’t hear! They were just like mice. I caught this fish on Crafty Catcher boilies, prawn ones that were pink and like bullets. It was 19lb 8ozs."

"This is the Legamunton Pond, Bushy Park. Bit of a Billingsgate shot there, with half a dozen carp laid out. Peanuts I remember were a successful bait back then. I must have been about 14 back then and just starting to really get into the carp fishing."

"The Thames is where I did an awful lot of my fishing as I was growing up, float fishing for all sorts. We used to lose carp all the time there, and in the end we stepped up our tackle. Float fishing bread flake was one of the best methods, and even when I really got into carp fishing and went back there years later that’s how we used to catch them. They were always such nice fish, all different, uncaught, and all such characters. Just recently I‘ve been going back there and fishing along the same stretch. Even some of the same old fish are still there. This one was about 13lb, not a big fish but they were big at the time. I was 16 then."

"This was the same year, and there’s a bit of a story with this one. It’s a 21lber. I can remember only a year or so after Carp-Talk started, Chris Ball did an article and it was someone called Phil Jackson who had caught a 21lber from a lake that joins the Thames. He’d taken the picture to his friend John Buckley and he said, “I recognise that fish.” It turned out that John had caught it from a lake that I think was called Willow Pool. That fish had then been moved from Willow Pool into one of the Boyers waters and then it had flooded into the Colne. From there it had then ended up in the Thames! This fish has gone an awful long way and it was just a great story.

"Sure enough it was the same fish that Phil had caught out of a back lake out of the Thames. I remember reading it and thinking, ‘I recognise that as well’ so I went through my pictures and I found it. This is that fish at 21lbs. But the story didn’t end there.

"I saw this fish several times in the papers over the years up to a weight of 32lbs. The shot was of a father and his two sons each side of him. That was a few years ago now, so who knows, this might be a Thames 40lber by now. My mate Dave showed me a slide of this the other night at 27lbs."

"Mid-winter on the Diana Pond. I used to do loads over there in the winter months. Just go over there for the day sessions. We used to get there as early as we could in the morning. You can see the buzzers in there, the monkey climbers and the Cardinal 55’s. The rods were Sundridge rods and they were the bees ‘n’ eees at the time!"

"This is a friendly old fish called Lucy that used to live in a lake not too far from my home called Winnyhill. It’s the same lake where I had the 19lber out of in Picture 3. I used to go up there on a pushbike after school and it was a bit of a hike, especially after school as you’d only get and hours fishing in, but you’d do it anyway.

"Once I was sixteen I got a little Honda Melody and all my mates used to take the mickey out of me and laugh, but at the end of the day it was a lot quicker than the bus and the pushbike. I can remember I went to the lake that day on my Honda Melody, red with its white wheels and I caught this one on a floater at 22lbs."

"This is my first 30lber, a 30lb 2oz common from Langlands, a water that Ron Buss used to run and he may well still run it today, but I now he certainly still fishes there. On a floater that one."

"Moving on a little bit, probably about 1991. This is on a little lake in Shepperton, a lake where The Pet used to live. On this occasion I’d lost it on a floater. It had taken me into the pads so the caption should read, ‘gutted’ because I was severely."

"This is The Pet herself. I ended up catching it a few weeks into the season, 26lb at the time. I remember I baited up all close season, it was one of those ones where it was my campaign for the summer. It was a big fish for me at the time.

"While we are on The Pet that was 1991 but moving forward to 2000-2001 it had jumped quite a long way and had ended in another lake. In that lake in grew an awful lot and it went up to nearly 50lbs and being as it was only down the road – a twenty minute drive, it was a fish I’ve caught before and I wouldn’t normally go for it again, but I just couldn’t resist it as it was nearly 50lbs. It was worth a go and I finished up catching her in April time one year. Pictures 12, 13 and 14 all cover that…" 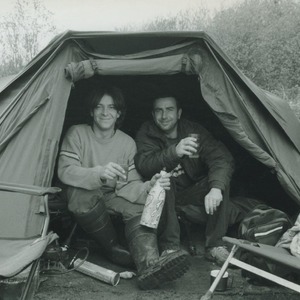 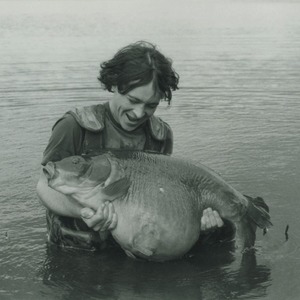 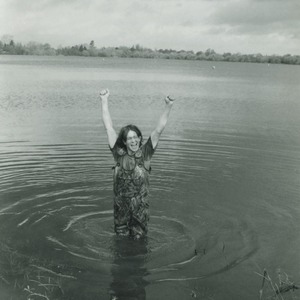 "This is my mate Tetley and I shortly after catching her. Now The Pet was a fish close to Tetley’s heart and he said that if I ever caught it, I was to give him a bell. So I did and he brought down a bottle of champagne and sat there and celebrated the capture. It was 48lbs when I caught it the second time, so it has grown an awful lot."

"This is on a lake called Silvermere. This lake has become a bit more well known in the last few years, as the fish in there have grown really well and the lake has now done a couple of forty-pounders. I had another go on there only two winters ago. It’s a good winter water although it is a low stock, but it’s very shallow. This picture was from 1991 and the original big ’un in there then was a fish called Armie, which used to go up to 30lbs. This is a shot of me returning her at 27lbs. Unfortunately she’s not there now, but if she was, I think she’d be a 50lber."

"It was very low water levels that summer and this is a shot of my playing one. Most of the areas where we were catching fish from, was no more than 18-inches deep."

"And how it used to be… This is a swim called the ‘H’ on Silvermere. You can sell the old set up: the Delkims – you had to have Delkims back then, they were just the in thing. I’ve got the monkey climbers, which back then were the business, well, we thought anyway! You also had to have the cross bar for your ‘climbers’ too! How things have changed!"