How good is the Blowback Rig?

Okay, so last month we looked at the Hinged Stiff Rig, this time I want to breakdown and analyse the rig that is commonly known as the 'Blow Back Rig'. Now the Blow Back Rig is an often used presentation incorporating a small sliding ring on the shank of the hook, with the ring attached to the Hair as a simple extension of the hooklink running up the back of the hook. Alternatively you could simply have a sliding ring placed on the shank, commonly between two small stops, with the bait being tied to the hook in the case of pop-ups or when used with a bottom/balanced set-up the bait is attached through the boilie with the aid of a small loop.

The rig in reality is just a standard Hair rig but with the incorporation of a small ring the thinking was that when the bait is sucked into the carp's mouth the hook would follow, but upon ejection the bait would be blown out and the ring would allow the hook to remain in position and prevent it turning around and following the hook out of the mouth bend first which, as I have highlighted many times in this series, is not an ideal situation. This all sounds a very good in theory, but as I will explain, from what I have seen in my observations and tests, it is just a theory!

Now I do realise (here comes the disclaimer bit!) that many thousands of carp have been caught on this set-up before and I have no doubt many more thousands will be in the future, but I believe this is because the rig is, as I pointed out above, no more than a simple Hair rig and whilst I do believe the ring can be of benefit (as I will explain later), I DO NOT believe the rigs main quality is that the bait can be ejected whilst leaving the hook in the mouth in the prime position. 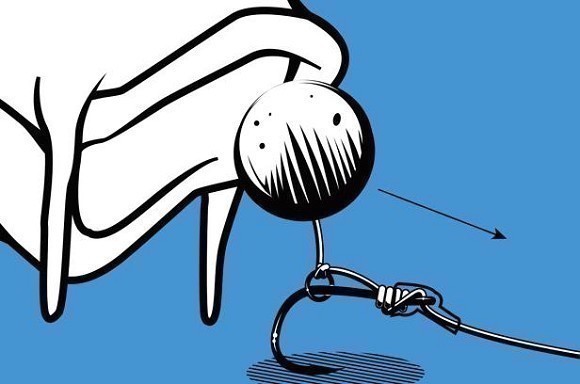 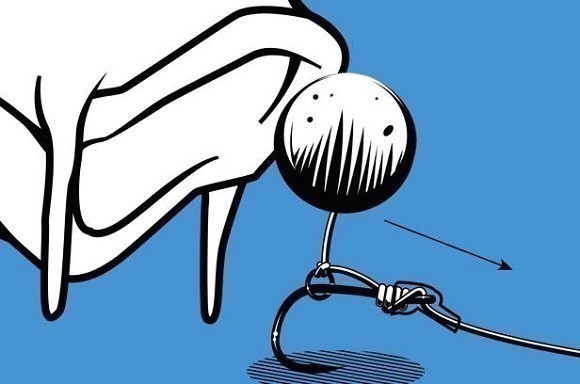 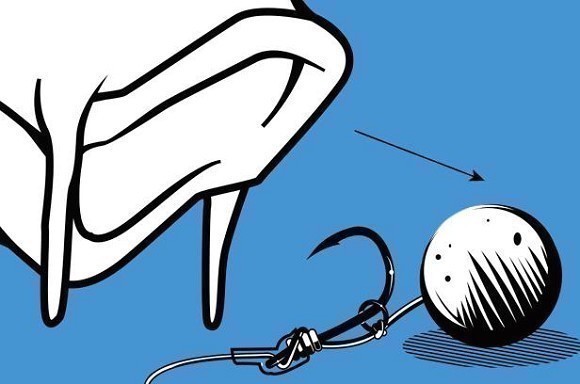 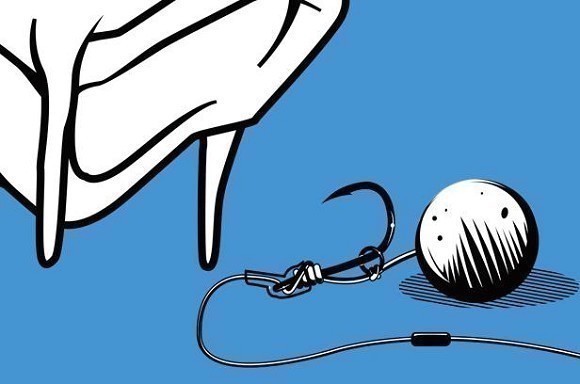 Firstly, lets look at the most commonly used way of setting this rig up, with the Hair as an extension of the main hooklink running up the back of the shank and then tied to the rig ring with the Hair extending out of the other side.

The rig, when tied in this fashion, does, without a doubt, give the bait slightly more movement than a small piece of silicon holding the Hair into place, which is of course a plus point. And when the rig is held in the hand or given the 'palm test' the theory seems to hold up, but imagine when this rig is sucked up into the mouth cavity, swirling around inside with more likely than not other baits, bits of weed and bottom debris etc. Upon ejection and this is demonstrated better by diagrams or actually holding a baited rig in your hand, unless the bait and hook are in perfect alignment inside the mouth, which we cannot guarantee so therefore we have to assume it will not be, the hook will follow the same exit path of the boilie as it would if it was just attached in the usual manner of the Hair being trapped by a piece of silicon etc.! As I said above, I don't think the ring does any harm, but it doesn't function in the way it was designed, it's as simple as that.

Slightly off tangent here, but study the well-used and highly successful KD Rig. This, in reality, is no more than a Blow Back Rig without the ring! Maybe this is why the KD is so successful, as it allows the bait to fully travel away from the hook at a 180-degree angle far more efficiently on an 'arc' so to speak without anything impeding it (like a rig ring!)

Anyway, back to the Blow Back. The rings that are generally used are very small and don't really work as the rig was originally designed because they are commonly used on short shank hooks and lets be honest, the movement of a ring sliding along a 1 to 2cm hook shank is not really enough. Obviously using a long shank hook can make this far more effective or a using a larger ring that can slide down the shank and easily pass over the eye of the hook is far more preferable, but, and it's a big BUT, when the rig is set-up in this manner it cannot easily re-set itself and when used with a supple hooklink material, the Hair and ring does have a nasty habit of tangling around the hooklink. The use of a very stiff coated braid with only a tiny stripped back section at the eye of the hook can help dramatically, which, as we have discussed, is a major factor. The only really effective way of ensuring the Blow Back Rig is used effectively is to use a pop-up, as not even a wafter will have enough buoyancy to re-position itself. If you really want to use the Blow Back Rig with a bottom bait, then I would advise only using a short shank hook, although you will just have to except that the fact that you are not fully exploiting the "blow back" principle. Conversely, when using a long shank hook, the bait must be buoyant.

One aspect that I have never heard anyone mentioning regarding this rig (or with the Hair trapped in the silicon) is that of being able to lose the bait (I'm talking mainly larger baits or boilies here). A few years ago, I was fishing a very, very, tricky water. The carp were absolute stunners and the lake itself was horrendously weedy, to the point of finding a clear spot was almost a result in itself! The lake whilst only about eight-acres and with a low stock it had earned the reputation of being rock hard, it was of no surprise that some of the syndicate members blanked for the whole of the season.

To cut a long story short, I was angling in one of the little corners of the pit and had a few of the bigger fish feeding in front of me and it wasn't too long before the middle rod absolutely ripped off. I struck and the carp powered off out into the lake taking nearly 40yds of line, coming to a halt in an area the size of a tennis court which was top to bottom with Canadian Pondweed. After around fifteen minutes of unsuccessfully using the usual tricks to coax the fish out, stalemate had been reached. There were no boats available on the lake due to some stupid rules enforced on the syndicate by the local wildlife authority that obviously had no understanding of the needs of the anglers, but I did have my small inflatable in my car! (That was a stroke of luck, eh!) So I quickly set about pumping it up and was soon reeling myself out towards the fish. As I got near to where my line was entering the water, I could see the fish sitting just below the surface entangled in a huge ball of weed. I tried to be as quiet as possible, which isn't easy in a boat and gently placed the net in the water in front of me, just behind the carp. What struck me was I could very evidently see my boilie being blown in and out, in and out of the carp's mouth, with some obvious force as the fish sulked, breathing heavily.

The carp was netted successfully and I returned to the bank. On the mat, I noticed that, unusually for me, the hook came out very easily – not that it was just 'nicked' but the hole had become visibly bigger than it should have been, given the fight was extremely short. The only real pressure that it had come under, bar the first initial run, was the 15 minutes or so of that boilie going in and out of the carp's mouth, as it was very firmly attached to the Hair in the usual manner, through the centre of the bait and fixed with a Hair stop etc.

I am convinced that if it had taken much longer to get that fish out the weed, the hook hold would have weakened to the point where I may have lost it. Think about the number of times a hooked fish goes into weed or a snag and is left with the rod on the rests etc. and is then given the big heave and is then lost. One of the main reasons is the natural action of the bait going in and out of the mouth during the fight. I now attach (bird life permitting) all my harder type baits with a small piece of Spaghetti instead of a boilie stop. Using a piece of spaghetti as a stop enables the bait to come off almost instantly when a fish is hooked, but is more than enough to hold the boilie in place for angling purposes.

The second way of mounting the ring on the shank of the hook can work very well indeed, but the same negatives apply as discussed above. The plus points are the hook is always in very close proximity to the bait when taken in the mouth, which for carp that are feeding very gently and cautiously is a real point to consider, but it still allows a degree of separation and when used with a pop-up will always re-set, very similar to the principles that apply in such effective rigs as the 360ş etc. One more thing I will add is from my findings, when the ring is used sliding up and down along the hook shank or on any rig where the bait is mounted very close to the hook, every effort should be made to make the hook "turn" as quickly and efficiently as possible. 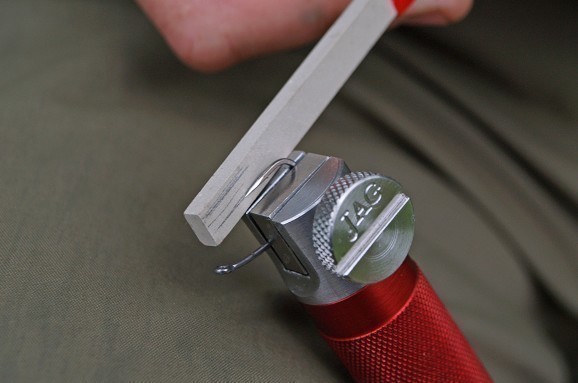 To sum up, the Blow Back Rig is a highly effective rig that can be used in many situations, but with a little thought and taking on board its limitations you can apply and use the rig far more effectively, but at the end of the day when using ANY rig the most important part of it is a hook that is as sharp as possible.

Just as a postscript to this article, I am sometimes asked to help out on the stands at a few of the carp shows around the country by the companies I have an association with. Just recently a few lads came over for a chat whilst I was manning the JAG stand and the conversation soon turned to rigs. The lads were very complimentary about my writing, saying the pieces really got them thinking about how rigs actually perform in situ etc., but they also had a little moan that I do not fully detail the products I use within my rigs! I make no apology for this, as I realise that these days some magazine articles are nothing more than blatant plugs and I know most people find them really annoying to read and at the end of the day, they do little more than alienate the reader, which is why you will see very little corporate flag waving in my pieces, as I will just not do it – unless the product is relevant of course. You will not see any products in my articles that I wouldn't actually use myself. End of.